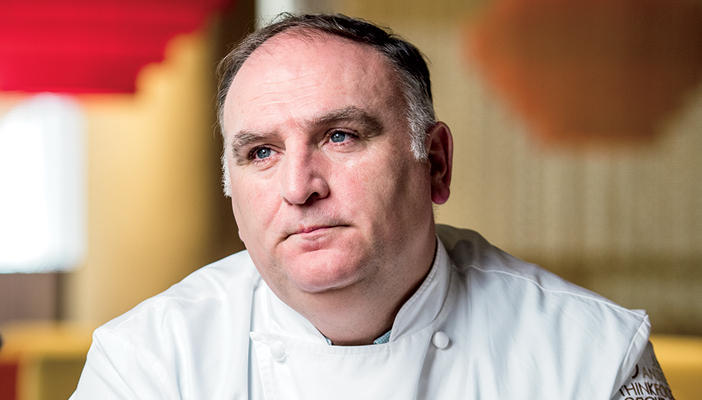 Named one of Time’s “100 Most Influential People” in both 2012 and 2018 and “Outstanding Chef” and “Humanitarian of the Year” by the James Beard Foundation, José Andrés is an internationally recognized culinary innovator, New York Times bestselling author, educator, television personality, humanitarian and chef/owner of ThinkFoodGroup. In 2010, he formed World Central Kitchen, a non-profit that provides smart solutions to end hunger and poverty, and in 2015 was awarded the National Humanities Medal from the National Endowment for the Humanities.

More recently, in June, he was named the recipient of the Julia Child Award from the Julia Child Foundation, and this fall, he’ll find out if he’s won the 2019 Nobel Peace Prize. A pioneer of Spanish tapas in the United States, he is known for his avant-garde cuisine and his award-winning group of 30 restaurants throughout the country and beyond.

Edible Orlando Publisher Kendra Lott and Editor Katie Farmand sat down with Chef José Andrés at Jaleo Disney Springs. Below are excerpts from their conversation.

On how the restaurant landed at Disney Springs: I tried over the years to get a Spanish restaurant in Epcot, tried working with the Spanish government … I was not lucky, but I never gave up. The opportunity showed up three years ago and we didn’t hesitate; we said, let’s do it!

On small plates and how Jaleo was successful in making tapas popular in the U.S.: Tapas didn’t begin with me, didn’t begin with Jaleo. But the truth is that the word “tapas” was badly used, it was not even small portions, it wasn’t a way of sharing … at Jaleo, we were the first ones encouraging sharing, to experience the way of life [of Spain]. There have been a lot of Spanish immigrants [to America]since the 1960 … with all due respect to the Native Indians and the British, the Spaniards came almost a hundred years before the British—unfortunately for you, the British took over and it took you longer to have good food in America. I still don’t understand why the British have so much influence in American cooking—and yeah, you can quote me.

The Innovative Menu at Jaleo

On innovation on the Jaleo menu: Quite frankly, sometimes everybody’s looking for the new thing, the new technique—and sometimes innovation, we can never forget, can be going back to something ancient that we’ve forgotten. That’s also part of innovation—rescuing things from forgotten past, and I think that’s very important. So on that front, I think Jaleo is always looking for dishes in Spanish culture that are forgotten. The [Josper] grill we have, while it’s a grill, it’s probably one of the biggest innovations you’ll find anywhere. We are able to use higher heat with charcoal, shorter cooking times, and cook so many more things—that itself, while very ancient, is also a big innovation.

On those famous liquid olives: Many years ago I put the liquid olives on the menu—I was always very hesitant but I’ve sold more liquid olives than my buddy Ferran [Adrià]. A lot of food critics will diminish anything having to do with culinary innovation—but whatever we think is traditional today was, 300 years ago, super modern. Puff pastry was probably super modern, and others probably thought “what the heck is he doing,” and now we find it in the frozen section of the supermarket. The innovations of today will be the traditions of tomorrow. Obviously not everything stays, not everything remains. We think we are very forward-thinking in this day and age; we are not. But I think we should keep trying to push the envelope. 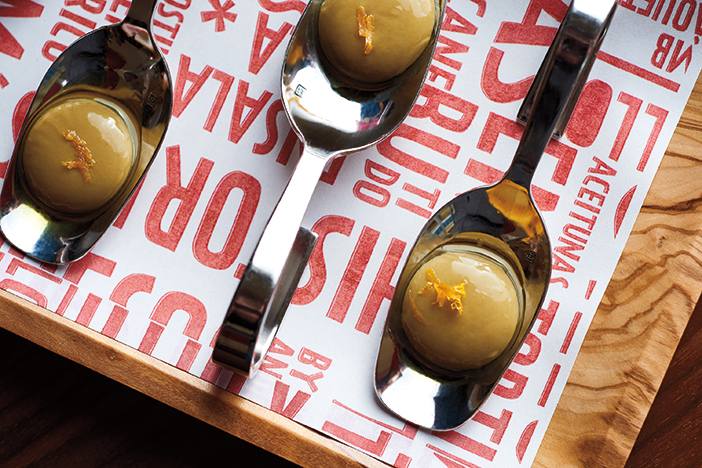 On getting guests to embrace what they don’t know: People complain that our rice isn’t yellow and full of things. And people complain that they can’t add whatever and when they want. Which is a very first world kind of “I want it now and I want it my way,” and in a humble way I tell them “You should open your own restaurant and f*** it up on your own.” I got very upset when The New York Times had a paella recipe with chili peppers and cheap chorizo and anything goes … when nobody in Spain even knows traditional paella.

So you have to come to Orlando to find traditional paella [at Jaleo], by the book. But then The New York Times has a recipe from a guy from London who does Middle Eastern cooking sending a recipe to tell Americans what paella is. Everyone talks about fake news—well, my point is, I agree with them. We cannot be always talking about tradition, and everybody obviously should be free to do what they like, especially in your restaurant and especially in your home. But when certain publications have so much influence on what the public perception is of something, they have a certain responsibility.

On cooking Spanish cuisine in America: I take the role of chaining myself to the traditions of Spain, maybe more than I wanted. I’m very proud of it, but sometimes it’s been hard. At my other restaurants, I tried to be as true to the food and ingredients as I can—Mexico, Peru. Sure, we took some liberties—different cooking methods to improve the flavor of the dish. Even traditional dishes can be improved. The quality of the ingredients is very important. How modern something is to you depends on what you know and where you come from … sometimes we forget that there are cutting-edge things all around us, and sometimes we don’t realize.

The Importance of Using the Best Ingredients

On the importance of the very best ingredients: Can you do Spanish cooking in America without Spanish ingredients? I would say no. If gazpacho becomes the most known tomato soup in the world, and no ingredient comes from Spain, what good does it do for Spain or the Spanish economy? The cook is only as good as his ingredients. It was hard at first cooking in America and not having certain products, like Iberico [pork].

I spent a lot of years of my life trying to bring it in—it was not as easy as picking up the phone. And we made it happen. I found a small producer who was willing to commit the investment and go through all the processes to go through USDA to get it approved, and the investment in the slaughterhouse … that took a lot of years. To bring the fresh meats gave me another product beyond the dried cured hams. It was a long road, finding the right people to bring it in, having to carry a lot of the cost at first, a lot of people said “Oh, this is very expensive,” but I said, “It is quality.”

I also have a cheese I helped produce, and an olive oil I am investing in.

On local and seasonal: Sometimes people are lecturing people on local and seasonal, and I’m like, what the f*** are you telling me? You’re drinking Champagne from France from 1999. I mean, really? I think everything has its place. If I can be buying artichokes nearby and they’re very good, why bring them from Spain? Local always when it’s logical, and seasonal always when it’s logical. I never took up the flag of local, but I don’t think there are many other restaurants in [Washington] D.C. that use more from local farmers in Pennsylvania, Maryland and Virginia.

I don’t tell anyone what to do in their home, but in our profession sometimes you need to be more pragmatic. Pragmatism is the word that wins the day. I think America is producing more and more quality cheese … so that’s good, but also you need to make sure Americans want to pay for it.

On Jaleo kids’ menu: I get criticism sometimes for not having a [different]kids’ menu; parents can be critical. But I say, this is my restaurant and I’m not in the business of feeding other children any different than I tried to feed my own, so we decided no children’s menu. We get complaints, but I’m like … we can put sauces on the side, but this is the food.

On cooking at home: At home, my wife is very much in charge. We have dishes that are part of our weekly menu … we eat a lot of vegetables in my house. She makes a great chickpeas and spinach that my daughters love. It’s an Arab-influenced dish from the south of Spain. Lentils in winter … good tortilla patata. We have an indoor salad garden and a mini-farm at the house. Asparagus, Swiss chard, very heavy on vegetables, scallops in season, rockfish in season in Maryland. Last week I was kind of teaching my wife to cook the whole fish. Twenty-five years later, I’m still teaching my wife.