I love walking into one of Orlando’s many independently owned restaurants and seeing all the ways the menu incorporates food from local farms. But there is something somewhat startling, even astounding, to see the local food movement seep into the food culture at Walt Disney World, where more than 475 full-service and quick-service restaurants and portable food carts serve more than 6,000 different food items every day. Feeding thousands of people at theme parks and resorts spanning Disney’s 30,000 acres is a colossal task. Suddenly becoming locally sourced isn’t an easy undertaking.

Frank Brough, Chef at The Wave… of American Flavors, thinks it’s well worth the effort. “We focus on three major issues here: local sources, sustainability, and healthfulness,” he says. In the last five years, the restaurant (which is tucked inside the lobby of the Contemporary Resort) has slowly grown its partnerships with Florida growers to the point that fare from local farms is a staple on the menu.

The Wave’s seasonal salad is a great example. Made with greens from Mount Dora, avocados from Homestead, citrus from Winter Garden, tomatoes from Winter Haven, and pecans from North Florida, the dish is entirely Florida sourced. “It’s really a great metaphor for how far we have come in five years,” Brough says. 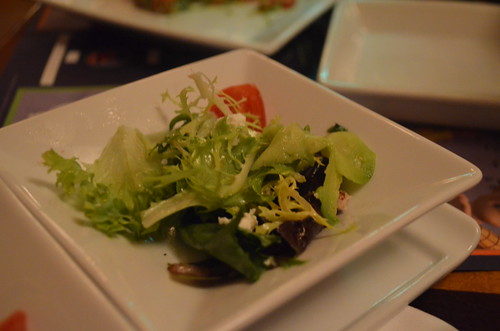 The seasonal salad is 100% Florida sourced.

Besides regularly showcasing Florida farmers at special chef’s dinners, The Wave’s culinary team often steps out of the kitchen and into the fields at places like Pero Family Farms in Delray Beach, where Brough gets the green beans he pairs with his Herb-Salt Seasoned Beef Tenderloin.

Local veggies take center stage in my favorite menu item, the Curry Vegetarian Stew. A light coconut milk-based sauce with only the slightest tinge of spicy heat means the flavors of the butternut squash, asparagus and apples get to shine. Other standouts include the Lump Crab-Florida Rock Shrimp Cakes and the daily grilled fish (which is always a sustainable catch) paired with roasted fingerling potatoes from South Florida. 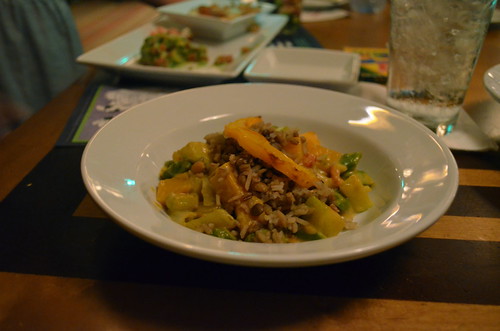 The Curry Vegetarian Stew was packed with tasty veggies that weren’t overpowered by the light coconut curry.

That restaurants have started jumping on board the local food movement isn’t simply just about joining the trend, Brough thinks. “I think it says that you’re paying attention to detail in terms of your restaurant, and that you’re focused on the quality of your ingredients,” he says. “I also think it shows a real support for the local economy.”

On October 27, Brough will join several Disney chefs at Edible Orlando’s inaugural Field to Feast, where each will serve up an unforgettable dish at Long & Scott Farms. Chef Frank’s dish will be a locally sourced sweet potato agnolotti with bourbon-maple pork belly, liquid caramel corn, and vanilla powder. 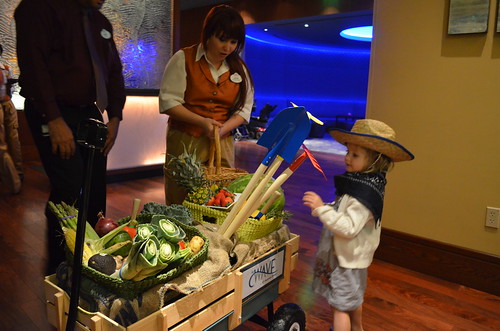 On a recent visit, my daughter, Aly, was chosen as The Wave’s honorary Farmer of the Day. Imagine her delight when after being given a farmer’s hat and handkerchief she was invited to select the provisions for her upcoming meal from the bounty of fruits and vegetables wheeled before her on a wooden wagon. Eyes wide and practically giddy with surprise and glee, Aly placed a handful of fresh items in her basket, including some strawberries, potatoes, avocado and blueberries. Twenty minutes later, the chef arrived at our table with her meal, which had been completely created from the items she had chosen. Needless say, she had no trouble eating her veggies on this special night.