Remember when we all got on that sourdough kick, babying our starter and fiddling with recipes to get just the right crust? (It wasn’t only me, right?) A lot of us have since gone back to the professionals who can whip up a brioche or pretzel kaiser better than we ever will. Check out the Q&A with Shannon Talty of Olde Hearth Bread Company in the current issue of Edible Orlando. So many local restaurants quietly use Olde Hearth’s bread because, like the rest of us, they leave it to the experts. You can also find Olde Hearth Bread Company in the Edible Orlando Artisan Guide, local artisans making delicious stuff from scratch and using quality ingredients.

Each week, Edible Orlando writer John Graham goes hunting for what’s new and notable, the five fun food things to do for the week ahead. This go-around, John’s got advice on both vegan burgers and steak with whiskey, fresh oysters and waffle beer.

Saturday, noon – 4 p.m., more than two dozen vendors are setting up at Persimmon Hollow Brewing in downtown Orlando for the Vegan BBQ Party. Menus are still being worked out, but we know there will be plant-based hot dogs, hamburgers, pulled “pork,” and churros. In addition to the vegan food and drink options, there will be live music and pets are welcome. No admission charge and you can sit inside and out. The BBQ is organized by Orlando Bearded Vegan.

Hourglass Brewing is celebrating ten years in business Saturday, 11 a.m. – 2 a.m., with a party at both the Longwood and Hourglass District locations. The anniversary celebration will feature more than 40 “flashback” beers from the last decade as well as five new beers. That includes Brekkie Kvass (brewed with The Waffle Bros. waffles, conditioned on maple syrup, granola, vanilla and orange peel) and Party Dinghy (an 11% ABV tropical stout rested in coconut rum barrels, brown-sugar rum barrels, and maple syrup barrels that once held rum). Both locations will also have food pop-ups, live music and merch releases.

Oysters, wine, and yacht rock… That’s this Monday at Tori Tori, the Japanese pub in Mills 50. The one-night “Yacht Club” is $50, 5 p.m. – 1 a.m. and gets you six freshly-shucked oysters from Samuels Seafood with unlimited Italian wines curated by Ethica. DJ BMF will play Kenny Loggins, The Doobie Brothers, Steely Dan and other yachty classics. Clubbers will have their own designated area (patio & lounge), but Tori Tori will also be open for other guests. The “nautical chic” dress code is optional. 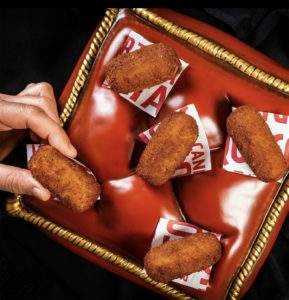 Mondays through Thursdays, Jaleo by José Andrés at Disney Springs is doing a Tour de España tasting menu of four courses for $49. Everyone at your table has to participate, but choices include Jaleo’s signature chicken croquetas served on a “pillow,” goat-cheese stuffed piquillo peppers, the paella of the day, and chocolate custard with brioche ice cream and olive oil drizzle. You can also add sommelier-selected wine pairings to your Tour de España for $25 per person.