Florida may not technically be in the barbecue belt, but it’s still home to some great ‘cue. We’ll leave it to the stalwarts to argue whether Texas or Tennessee is tops. Meanwhile, check out our list for the best BBQ Orlando has to offer. 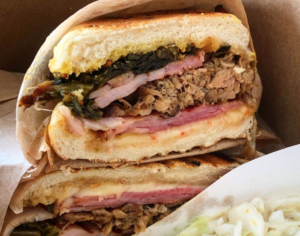 The perfect pulled pork at Swine & Sons stars in its own sandwich. Plus, it makes a cameo in the Southern Cuban (pictured; available only at Winter Park location) or covers a pile of fries tossed with pimento cheese, pickled jalepeños, “fierce Pierce” bbq sauce, and bacon. The Sanford location, inside Tuffy’s Bottle Shop and Lounge, also offers a side of Texas-style baked beans to complement your ‘cue. 669 North Orange Ave., Winter Park; 200 South Myrtle Ave., Sanford.

Jesse’s Rib Shack has been serving ribs with their “magic” sauce since 1987. Check their Facebook page for hours and specials, including fried lobster and seafood mac-and-cheese. 2202 West Pine St., Orlando. 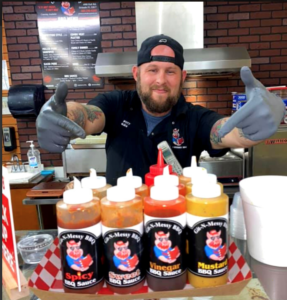 The folks behind Git-N-Messy BBQ maintain that, “If it ain’t messy, it ain’t BBQ.” In December 2021, they moved to Henry’s Depot in Sanford, where a wall pays tribute to founder Chuck Cobb (pictured), who passed away earlier that year. Chef Cobb’s famous smoked brisket still stars in their menu, both on a sandwich and in a queso dip with jalapeños. 212 West 1st St., Sanford.

Lots of locales claim to be the barbecue capitol, but for the owners of Uncle Kenny’s BBQ it’s no contest: their home state of Missouri. They continue to compete (and win) competitions sanctioned by the Kansas City Barbeque Society and the Florida Barbeque Association. Still, their menu gives space to outliers like Nashville hot chicken and Carolina pork. 141 US-27, Clermont.

4Rivers Smokehouse fans may clamor for newfangled menu items such as the Messy Pig–a pile of pulled pork between layers of coleslaw topped with pickles and jalepeños and sandwiched in a brioche bun–but it all began with brisket when the first location opened in Winter Park in 2009. The 4Rivers version is aged for 30 days, rubbed with a signature blend of spices, smoked for 18 hours and sliced to order. Locations throughout Central Florida. 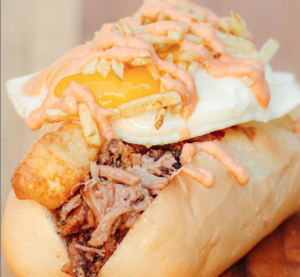 There are a couple of plain Jane sandwiches–that’s literally what they’re called–at Pig Floyd’s Urban Barbakoa. We say go big, or stay home. The biggest by far is the Matahambre (pictured), or “Hunger Killer,” a toasted baguette piled high with oak-smoked brisket and topped with fried cheese, potato sticks and a sunny-side up egg. Other menu options feature meats tucked into tacos or in a bento box. 1326 North Mills Ave., Orlando.

Barbecue with a Donut

You may have previously enjoyed barbecue without a hot donut to accompany it, but Ian Russel has made sure that you never have to do so again. The Culinary Institute of America grad is the chef/owner of Smoke & Donuts, where traditionally spiced and smoked meats meet regionally inspired and locally sourced side and of course, donuts. The menu is small but mighty, and both classic and creative sandwiches are served on potato rolls from Olde Hearth Bread Company. Sliders (pictured above) are served on vanilla-glazed donuts with sea salt. 2545 Coolidge Ave., Orlando and at Á la Carte, 609 Irvington Ave., Orlando. 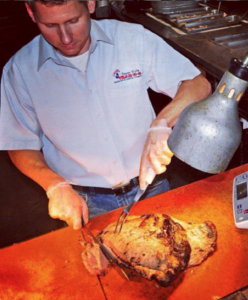 All of the meats at Cecil’s Texas Style Bar-B-Que are smoked over hickory and have been ever since Cecil Reaves founded this old-school eatery in 1992. There are jalepeños in side of both mashed potatoes and chili beans. Otherwise, the menu is as classic Southern as it gets. 2800 South Orange Ave., Orlando.
At The Ravenous Pig, the kitchen is as adept with wild-caught seafood or Moulard duck breast as it is with tacos and burgers. Keep an eye out for heat-and-eat BBQ pack on the weekly curbside menu at their General Store. You can score slow-roasted baby back ribs, jalepeño cheddar wurst, half a smoked chicken and sides. 565 West Fairbanks Ave., Winter Park.
For more Orlando dining inspiration, visit our archives.
Share. Twitter Facebook Google+ Pinterest LinkedIn Tumblr Email