On the eastern edge of Geneva off Snow Hill Road, near where the Econlockhatchee River skirts Seminole County, Imogene Yarborough takes an old acquaintance through the Camp House of the sprawling Yarborough Florida cattle ranch, one of the area’s last remaining family farms.

Imogene (pronounced Eye-mo-gene), 84, is not only the matriarch of the family, but she’s also the undeniable leader of Florida agriculture education, and she’s the only individual to have been awarded a “Fresh From Florida” designation by the state for her homemade Guava Butter.

Imogene settles into a deep blue wingback chair by the fireplace that warms the room on this chilly day. Deer antlers rim the top of walls, her late husband Ed’s well-worn saddle is displayed behind her chair and mementos from a life dedicated to farming and family are everywhere. The rustic Camp House is where the Yarboroughs gather for holidays and other family events. On occasion the house and adjacent pavilion open for industry workshops and meetings for groups such as Seminole County Cattlemen’s Association.

Ed and Imogene Yarborough began ranching in Seminole County in 1954 on 8,000 acres of pine flatwoods, saw palmettos, oak hammocks and sandhill habitats. The land had been in Ed’s pioneer family for generations. Over the next 46 years, the two would raise four children and thousands of head of cattle, until Ed’s death in 2000.

The legacy the couple built together and Imogene now shoulders continues to focus on stewardship of the land, educating young people, civic duty and promoting the industry. 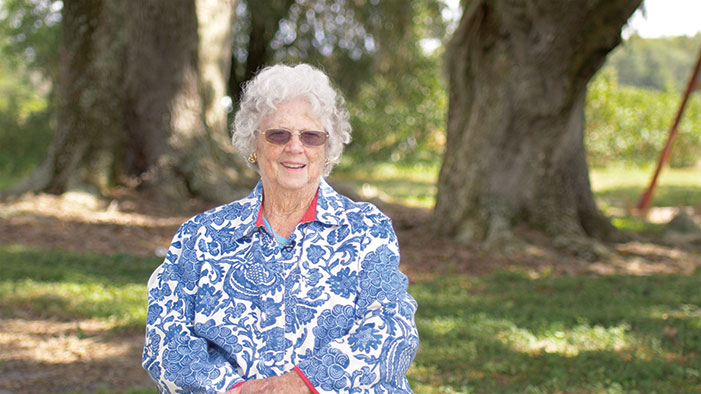 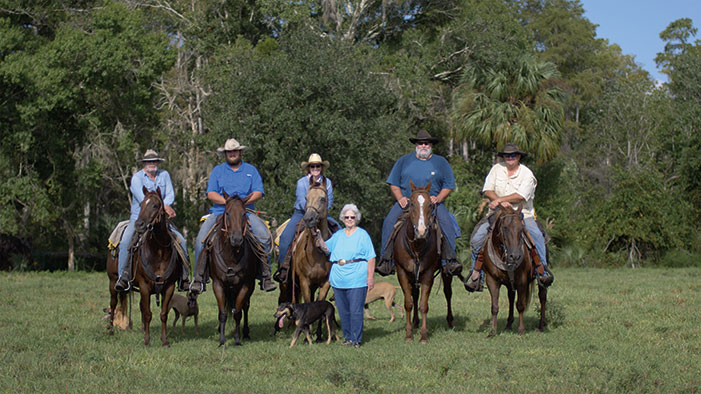 Growing through the years

The Yarboroughs developed better pastures by thoughtful plantings and cattle rotation. In addition, they improved their herds of scrub cattle through crossbreeding with the beefier Brahman. In 1997, the family negotiated with the St. Johns River Water Management District to create a 3,400-acre conservation easement on Yarborough Ranch. This agreement protects 7 miles of the Econlockhatchee River and 2 miles of the St. Johns River. It also allowed for the building of a public canoe landing and park. 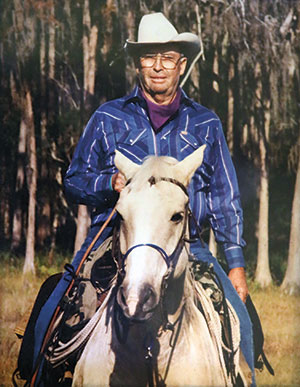 Ed Yarborough on horseback during the Great Cattle Drive, 1995

Ed and Imogene helped organize the Great Florida Cattle Drive of 1995, which celebrated Florida’s 150th year of statehood and the state’s ranching heritage. Seven hundred riders and 100 horse-drawn wagons moved a thousand head of native Florida cattle 70 miles along the historic Peavine Trail in Southern Central Florida. The drive took six days. Participants dressed in period costumes, and at night they camped under the stars. Ed and his sons rode horseback, while his daughters drove teams of draft horses pulling wagonloads of family and friends.

“God, heritage and tradition have guided this family well for many years and I hope many more years to come,” says Imogene.

Imogene mirrors that commitment to community as a church leader, ardent volunteer for charity projects and industry proponent. She could fill the Camp House walls top to bottom with her awards for leadership in all her interests. But make no mistake—her life is not guided by the pursuit of accolades. The honors fall to her naturally.

“I didn’t even know most of these awards existed,” she says, shaking and bowing her head humbly. “All I have ever wanted to do is make sure people understand what our farming world was all about and why it’s important.”

Imogene served on the Florida Cattlewomen’s board of directors for 12 years, and in 1984 she was elected president. But teaching is what fuels her soul. Through 4H, the Girl Scouts, Agriculture in the Classroom initiatives and more, she has made a marked impact.

“Children need to know where food comes from,” says Imogene. “When a youngster pulls a carrot out of the ground that they planted and cared for, it can change their world. The expression on their face says it all.”

The next generation of Florida cattle wranglers

Many years ago, Imogene started going into classrooms to teach about all the useful products—beyond food—that come from cattle.

“I created Beef An’—for beef and more,” she says. The wood cow was on wheels and included a large red gingham bag stuffed with samples of by-products made from cows after the prized meat was removed. All were items that children would recognize: baseball gloves, softballs, shoes, piano keys, soap and more. The big bag of marshmallows always brought forth an audible response from the entire classroom. At the Camp House, a small replica of Beef An’ pays tribute to Imogene’s creative approaches to teaching. In addition to utilizing Beef An’, Imogene went to clown school to improve her agriculture communication with students.

“Imogene has been one of agriculture’s most important ambassadors on a local and state level, educating others about the importance of agriculture,” says Shane Michael, Seminole County UF/IFAS extension director. “The work she has done over the decades has had a huge impact.”

In 2007, the Yarboroughs were inducted into the Florida Agriculture Hall of Fame, and in 2018 Imogene was honored with the Extension Advocate Award.

“She’s got another one coming,” says her daughter Lynn Hanshew while adjusting a plaque at the Camp House.

Imogene shakes her head and smiles: “You can’t go about just to win awards. You have to make the world a better place. We raised our children with the guiding principle that this is all God’s country, and we’ve been blessed to be the caregivers of the land and our animals.”

Do you know the difference between rib eye and eye round? We can help.

When you get your hands on some fresh Florida beef, try this recipe for grilled lemongrass beef spring rolls.