With not everyone beating a path to planes, trains or cruise ships in this pandemic, isn’t it nice knowing you can pack up for a driving vacation in Florida that’s guaranteed to change your scenery and mood? Where even one night at a destination not called home can be cathartic?

Add a couple great dining discoveries at that destination, including a former church and – take a bow – you have made your escape from homebound routines without being far from home.

In Citrus County 90 minutes from Orlando, Vintage on 5th and Wallace’s at the Greenhouse (pictured above) are destination restaurants with kitchens that can stand with any in the region. About as far apart in look as Crystal River is from Dubai, both restaurants have commonalities in creative cuisine, extensive menus and wine lists, reasonable prices and exceptional service.

For a day trip or, less frantically, an overnight in a coastal Gulf county known for its quiet pace and communing with nature, you’ll be glad you tried one or both dining experiences.

From Orlando, head west on State Road 50. And west. And west. On the far side of the state, tooling northwest from the happening town of Brooksville puts you on U.S. Hwy. 19 north to Crystal River. 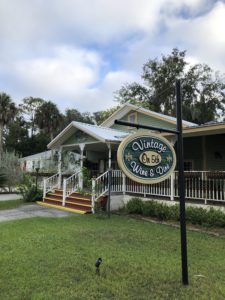 It was the 1940s and the little corner church on NE 5th Street pulsed with the joyful noise of choirs and congregations giving praise. Vintage owners Rodney and Jennifer Carr welcome a different kind of faithful today, locals and out-of-towners alike, who come for the inventive cuisine of chef Aaron Davidson backed by an award-winning wine cellar (the Carrs were distributors in a former life).

“More upscale Southern — I try to fancy it up,” is how Chef describes the magic that comes from his kitchen in this fine-dining-yet-casual outpost in the historic district.  “What makes us special is caring about what we do.”

The self-taught Davidson and the three chefs under him are menu maestros and the Carrs give them enough slack to do their creative thing. 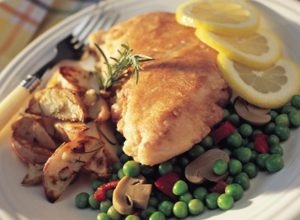 Sauces are to play with, and they do. Sauces co-star in the options you get with Vintage’s Gulf Grouper (sensational!), the portabella mushroom cream sauce that completes the popular Shrimp & Grits and the basil cream sauce that dresses the Chicken Roulade.

Chilean Sea Bass, Rack of Lamb, hand-cut steaks and Duck Breast are menu mainstays; Davidson and team change out sauces to fit their whim. Seabass might get a sauce Veronique. A chipotle lime butter creation might sauce the duck. Chef pairs the VO5 Signature Fettucine with a spicy cream sauce. The 5th Street Mac-n-Cheese, done Vintage-style decadent, is tossed with goat cheese, smoked bacon and diced tomatoes. Anyone still undecided can choose from specials and sides that change daily.

“Southern” threads through the starters. She-Crab Soup – creamily and dreamingly savory – gets deservedly high marks. Regulars also swear by the Truffle Fries, Firecracker Shrimp and the Fried Green Tomatoes, served with a goat cheese and applewood bacon crumbles. Maybe it was sinful in this former church but I splurged on a second app. Vintage’s shrimp cocktail presented the plumpest, meatiest shrimp I ever tasted over a horseradish cocktail sauce that brought enough heat to nearly evoke a “Let us pray.” 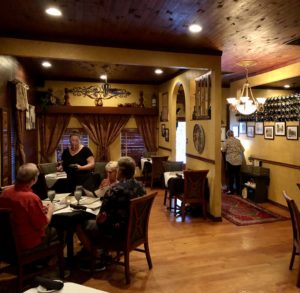 Warm accents of woods and mosaics dominate at Vintage on 5th.

At dessert time it doesn’t get any more Southern than homemade Key Lime Pie, Carrot Cake or an old-fashioned Root Beer Float.

An eye-pleasing warmth pervades the main room and adjacent lounge. Soft lighting, dark woods, ceiling fans and shutter windows framed in heavy drapery give Vintage a warm and clubby feel. Stroll the wood floor for a look around. A local artist did the colorful mosaics, explained front-of-house manager Valerie Bibb. Dining indoors or out on the wraparound veranda, Vintage on 5th burnishes its reputation as one of the best kitchens around.

Can I get an Amen? 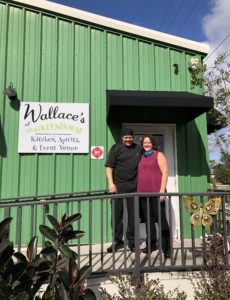 Wallace’s at the Greenhouse

For Executive Chef Wallace Phaire Jr., his appreciation for good food started at an early age in his native St. Croix. “When other kids were having what kids have at age 6,” he recalls, “I was trying paneer. Paneer!”

Phaire can still recall the aromas of island life. “Real farm to table there,” he remembered. “What was indigenous to the area, what was most primitive, you got. Then you realize how Grandma got to cook for everybody, how she made her stew the way she did. It was basic food in bellies.” 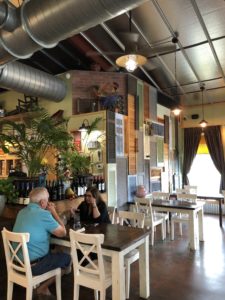 Eclectic decor greets diner at Wallace’s at the Greenhouse

Phaire brings his islands-inspired culinary talents to a wonderfully eclectic little roadhouse on busy U.S. 19 near the headwaters of the Halls River. Amid crazy-quilt patchwork décor of antiques and walls hung with colorful shutters, doors and chairs, Wallace’s at the Greenhouse is a little kitchen doing big things.

Open only since August 2019, Wallace’s at the Greenhouse prides itself on its scratch kitchen. Menus change out frequently, Stefanie says, but nothing goes unordered. Which, for a sizeable menu, speaks volumes.

‘When we settled here, the food was very universal,” explained Chef Phaire. “It wasn’t something I wanted to do. So my thinking was let me be crazy enough to put 30 items on the menu and see what sticks.”

“Everything stuck. It was all well received from beginning to end.”

Just when your eyes glaze over at all the choices, you brake for a guilty pleasure from a bygone time. Phaire has elevated the grilled cheese sandwich to an art form. The “JBP” Grilled Cheese with jerk braised pork was my choice. Wallace’s Ham-On! comes with a supporting cast of brie, fig-raspberry jam, arugula and Dijon mustard.  Truffle honey flavors the Truffle Caprese Grilled Cheese. Pair any handheld with a crock of Chef’s onion soup gratinee and – sorry Mom – this grilled cheese will blow you away.

Phaire gets to mix it up with wine dinners, whiskey dinners, “MusselMania” (bivalves flown in from Prince Edward Island), filet weeks, hummus of the week – whatever mood strikes him. Salads from Sassy Nicoise to Calypso Mahi with homemade dressings get the same creative treatment. “Everybody says the champagne vinaigrette is drinkable,” cracks Stefanie.

Comfort dishes dominate the menu. Order up the hot pimento cheese crab dip as the prelude to a diverse, if dizzying, array of entrees from steaks to pasta to seafood. Chef is keenest on his Simply Roasted Chicken; a love of Bavarian weisswurst inspired his meatloaf. Grilled mahi for his fish and chips comes with an olive and garlic confit. Shrimp and fried (!) grits is presented with andouille sausage and a Cajun cream sauce. Don’t wince at the Parmesan Pesto Cod, either. Strange as that pairing sounds, the flavor wins raves.

Mustards and sauces are important to Wallace, even if he has to dial down the heat of his native Caribbean dishes. “Not out to burn tongues,” he says. “There’s no point in hot sauce if you can’t taste the food.”

Phaire’s cooking career has been defined by family, from those early days around Grandma’s kettle to parents and in-laws schooled in other professions who lent him their business model for success. Wallace and Stefanie defy the trend to restaurants cashing in with holiday crowds. They close Wallace’s to be with family.

Finishing up lunch, Bob and Sue Harrington of Homosassa said they were unabashed loyalists. “Not a fan of the chain places,” said Sue. “This is the only place we come, and twice a week,” echoed Bob over his grilled mahi and shrimp pasta.