When it comes to cooking at home, we say the fewer rules the better. Start with these simple meals to make at home, learn to make them the way you want to eat them, and become a more confident cook in the process. Pretty soon you’ll be improvising like a pro. 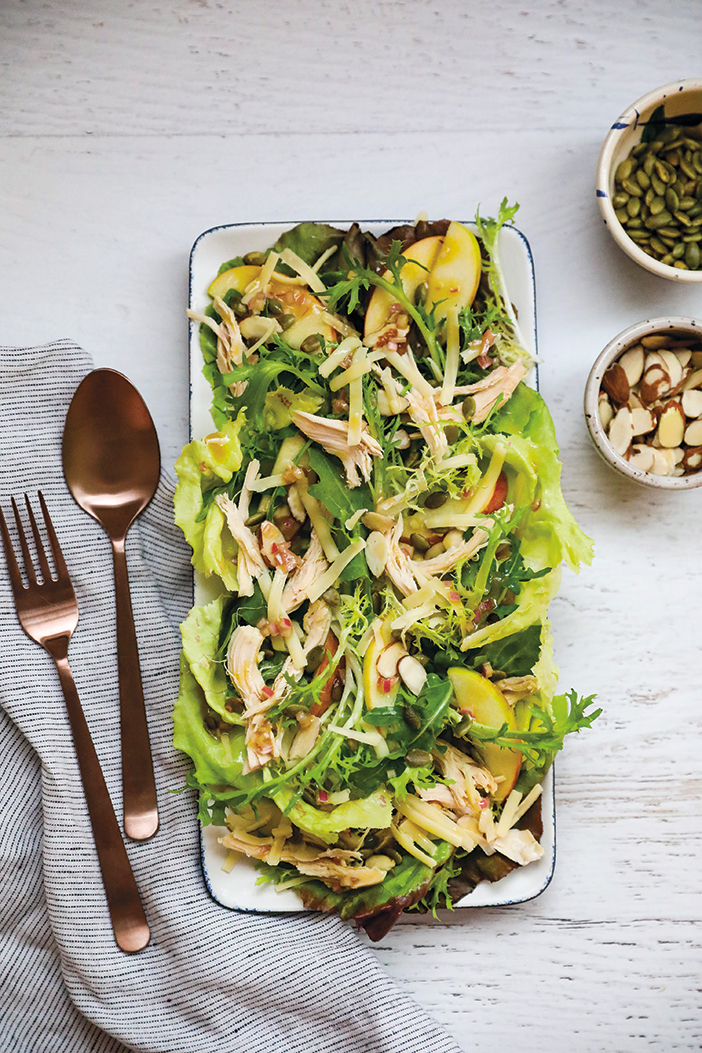 Dice a shallot and put it in a medium bowl with the juice of half a lemon. While it soaks, shred a rotisserie chicken. Toss the chicken with salad greens of your choice (red or green leaf lettuce, arugula, and frisée are all great choices). Slice an apple, toss it in the lemon-shallot mixture, then lift it out of the lemon juice and toss with the salad. Whisk enough olive oil into lemon-shallot mixture to create a vinaigrette. Season to taste with salt and pepper. Toss salad with dressing and top with some sliced almonds and pepitas for crunch and a sharp, nutty cheese like shredded aged cheddar. 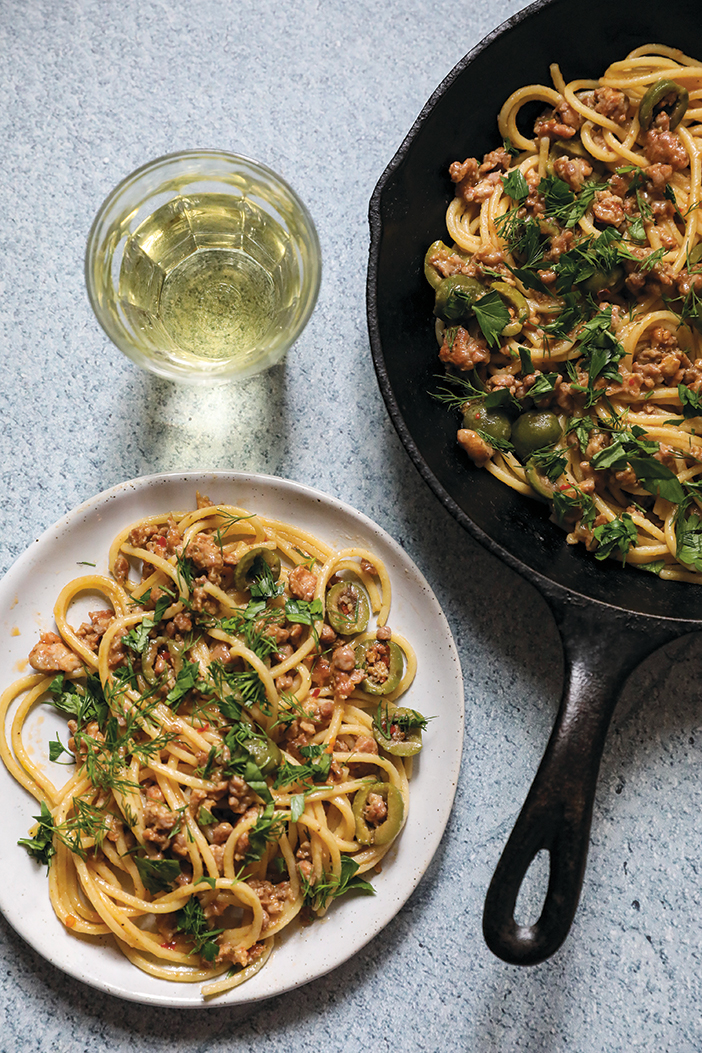 Pasta with Sausage, Olives, and Lots of Herbs

Crumble two links of fresh Italian sausage in a hot skillet with a slick of olive oil. While it cooks, boil some pasta in salty water. Back to the skillet: when sausage is golden brown, add a handful of chopped Castelvetrano olives. When the pasta is just shy of being done, use a slotted spoon to transfer it to the skillet (leave the cooking water behind). Add about ½ cup of pasta water to the skillet and toss pasta, sausage, and olives together until it all comes together into a silky sauce. Taste pasta, and if it’s still a bit too chewy, repeat the process with another ½ cup of pasta water. Just before serving, add a few handfuls of chopped fresh dill, parsley and basil. 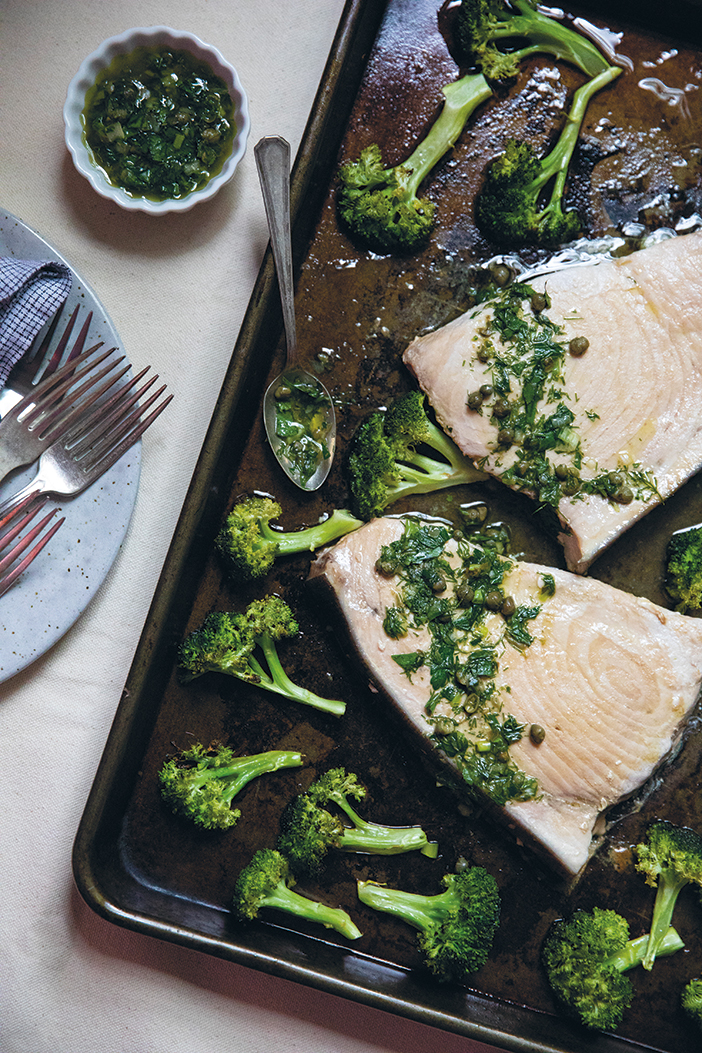 Swordfish with Broccoli and Salsa Verde

Buy the freshest fish you can find; Florida-caught swordfish is excellent, but this really works with any fresh catch you can find. Heat the oven to 400°F. Drizzle a bit of olive oil on a sheet pan; brush fish with olive oil and place on pan. Toss broccoli spears in oil on pan and spread out. Cook about 10 minutes, or until fish is cooked.

While fish and broccoli roast, chop a few handfuls of fresh parsley and dill and place in a shallow bowl. Roughly chop some capers and green onions and add to bowl. Squeeze in half of a lime and whisk in some olive oil. Season to taste with salt and pepper. Top cooked fish with salsa verde. 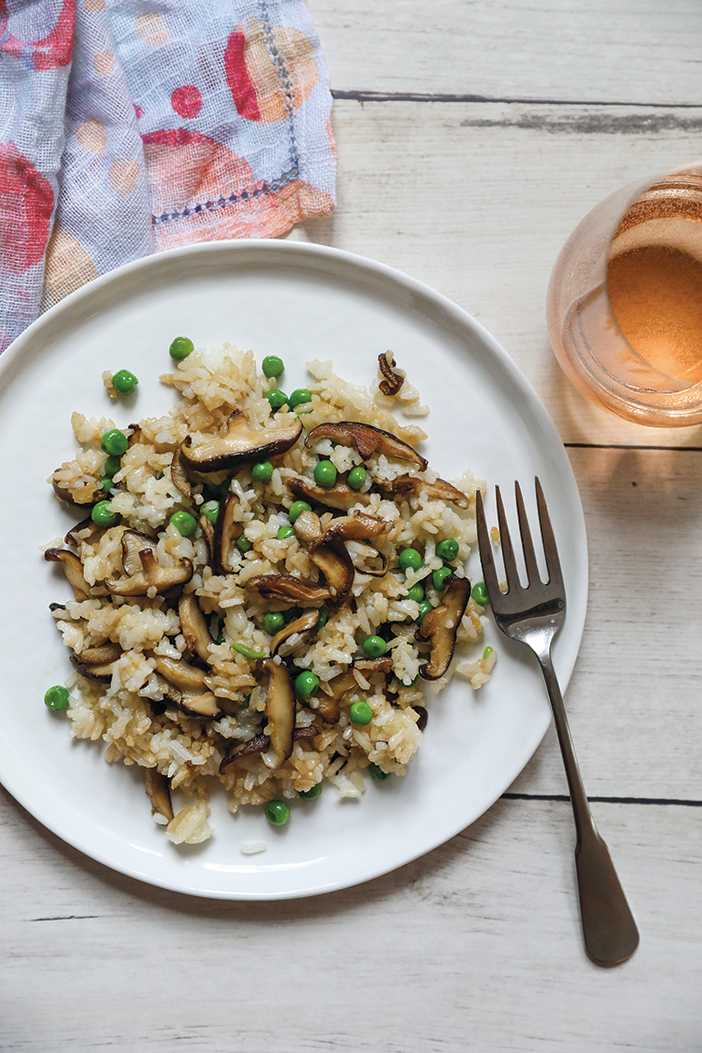 This is a perfect way to use leftover rice, either from the night before or from that Thai takeout you had over the weekend. You’ll want about a cup to a cup and a half per person. Heat a splash of neutral oil in a large skillet over high heat. Add some sliced shiitake mushrooms (about ½ cup per person) and let them get nice and golden brown. Don’t salt them until they’ve got some color. Remove mushrooms from the pan, add another generous splash of the same oil to the pan and return to high heat. Add a few cloves of minced garlic (and a bit of minced ginger if you have it!). Toss in oil for about 10 seconds, then add rice. Toss together, then let it sit for a minute or so to let the rice get a little crispy. Add mushrooms back in, and a few handfuls of frozen peas. Drizzle in some soy sauce at that point, as well. Toss, toss, toss, until mixture is sufficiently golden and peas are heated through. If you’d like, you can clear a hole in the center of the mix, scramble an egg in the space, and mix it through. Drizzle with toasted sesame oil just before serving. 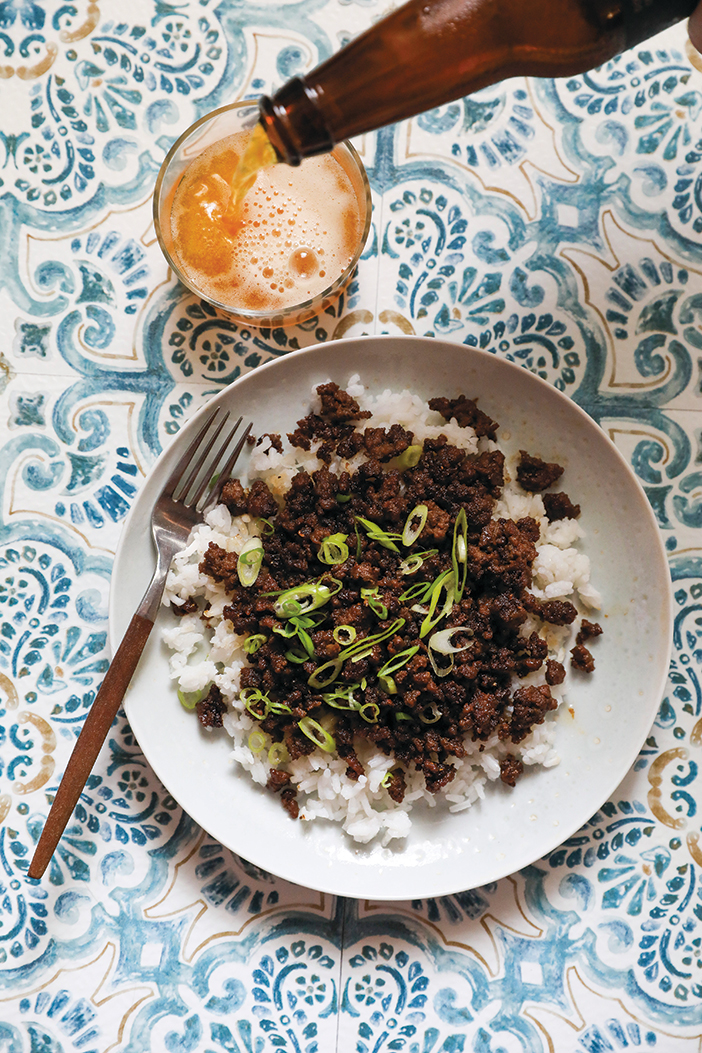 Start by grating a 2-inch piece of ginger (peeled if you prefer) and 2 big cloves of garlic into a small bowl. Add about 1/4 cup of soy sauce and about half as much brown sugar. Add a bit of hot pepper flakes if you like things spicy. Set this sauce aside.

Brown a pound of ground beef in a hot skillet. When it’s nicely brown, turn the heat to low and add reserved sauce. Simmer a few minutes until sauce is thick. Off the heat, drizzle in a teaspoon or so of toasted sesame oil. Serve with cooked white rice, topped with thinly sliced green onion. 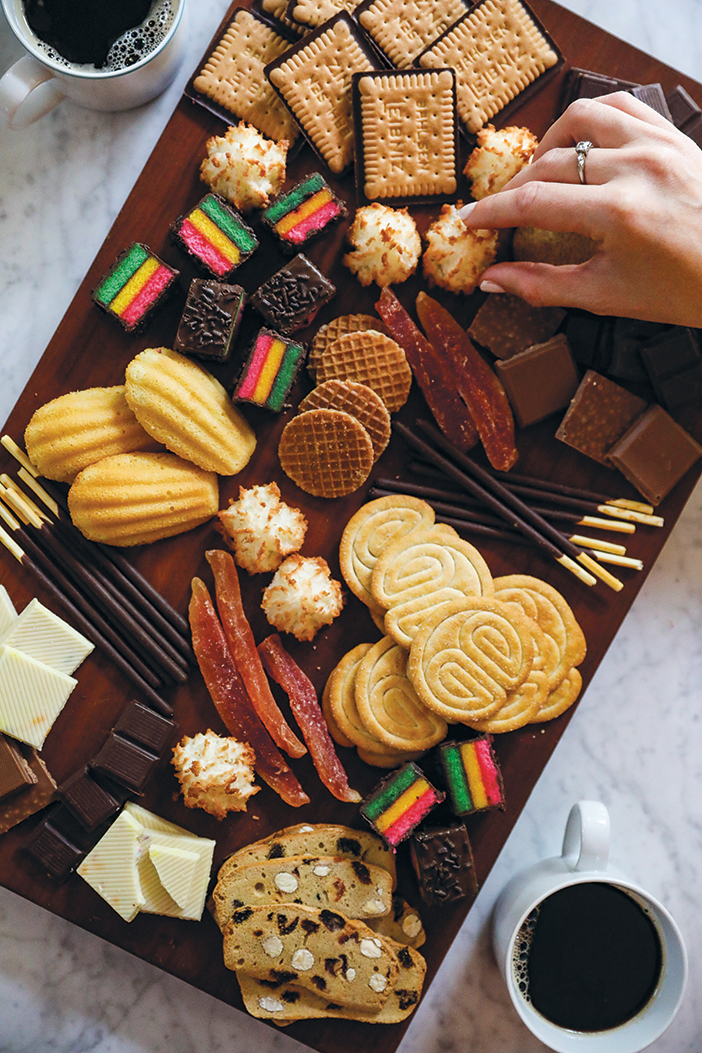 Quite possibly the easiest dessert that will still make people ooh and aah: a pretty, assembled board of store-bought goodies. You could go with a theme—all French-inspired desserts, perhaps. You could stick to a color palette and create an ombre dark to milk to white chocolate look. You could even throw it back and collect snack cakes and retro candies.

We love to scour the shelves at local markets to find interesting chocolate bars and imported cookies. Chewy macaroons are always a hit, ditto tiny cakes and stroopwafels.