Here are some quick tips for fun food events around Orlando this week, including Santa Brunches, Holiday Markets and more.

We’ll confess. Sometimes, we read recipes knowing we might never make them. We’re not flying to Barcelona or Tokyo anytime soon either, but just love to read about kabuki and Gaudí’s Parc Güell. It’s dreaming without the hassle of reality. In the current print edition of Edible Orlando, you can read about writer Michael Cuglietta and his brave attempt to keep up in the kitchen with Chef Jen Berdin from Kadence, Audubon Park’s sushi and sake bar.

That said, sometimes you’ve just got to get moving. Each week, Edible Orlando writer John Graham tracks down the best five fun food events happening in and around Orlando, Saturday through Friday. Just like the title of that Charlie Brown song, Christmas time is here!

With all the brunch stops Santa is making around Orlando this weekend, he’s going to be stuffed. Saturday, 9 – 11 a.m., Santa’s got breakfast and a holiday bazaar at Marketplace at Avalon Park. That’s $10 to benefit Avalon Park Kiwanis. He’ll also pop into Canvas in Lake Nona, 10 a.m. – 2 p.m., during the regular brunch for photos with diners. Let’s not forget the Wekiva Island Santa breakfast, 9 a.m. – noon on Saturday with omelet bar buffet that’s $17.95 for adults and $12.95 for children 10 and under.

Sunday, Kris Kringle visits Honolulu Harry’s, 11 a.m. – 12:30 p.m., for a plated brunch with milkshake bar, $40 for adults and $25 for children under 12. The man in red will also make it to Mount Dora and Lil’ Bit of Life farm, 10 a.m. – 2 p.m., for photos, kids’ ugly sweater contest, and waffles on a stick with The Juice Box. Santa’s popular, so you’ll want reservations for all these visits from St. Nicholas.

Saturday, the Hourglass District restaurants, bars and merchants are throwing an outdoor Holiday Market. From noon to 5 p.m., 70 vendors will be selling handcrafted and vintage potential gifts. But what about the festive food and drink? Claddagh Cottage Irish Pub will be moving the taps outside along with cottage pie and pasties. Hourglass Brewing has a chestnut/hazelnut stout. Leguminati will put a holiday spin on their usual weekend-only vegan doughnuts. Several food trucks will also join the district’s restaurants, including Cholo Dogs and Munchies Smokehouse BBQ. After the Holiday Market, Hourglass Brewing will host an Ugly Sweater Get-Together with prizes and a 15-percent discount if you wear one. 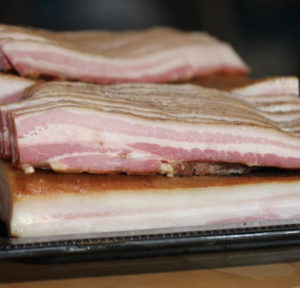 Bring on the bacon!

Give a toy and (maybe) get bacon! The U.S. Marine Corps Reserve’s Toys for Tots program collects and gives out toys for children whose parents can’t afford Christmas gifts. You can find toy drop-off sites all over Central Florida, but Hinckley’s Fancy Meats at East End Market is adding a twist: everyone who brings in a new toy during regular hours until Dec. 16 is entered in a raffle for a five-pound slab of Hinckley’s Fancy Bacon. Hinckley’s is also bringing back its two-person Viking Christmas Dinner for Dec. 24 pick-up. For $135, you get a meal including goose paté, elk meatballs, beef roulade filled with juniper rosemary bacon and leeks, braised cabbage and apples, and spice cake. Glögg, spiced red wine with honey and brandy, is an extra $30.

Now through New Year’s Day, the Caribe Royale Orlando resort is bringing back its 32-foot chocolate “North Pole Express” train in the lobby, In fact, that’s it at the top of this page. This year, Chef Joshua (“Candy”) Cain and his team are adding sweet sculptures of Santa and his reindeer. They used 1600 pounds of chocolate for the train and 2000 pounds more for Santa and his crew of nine. (Yes, that includes Rudolph.) The resort’s elves have also hidden 12 gnomes around the lobby for all to hunt and find. You can also drop a postcard in the “Letters to Santa” mailbox and for the grown-ups, the lobby’s Rum Bar featuring Bacardi has added some chocolate holiday drinks. 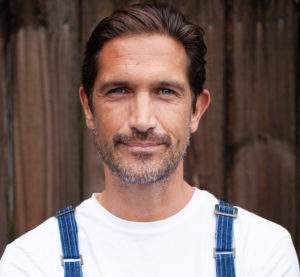 Fans of “The Great British Bake Off” will be chuffed to learn that Thursday, 6 – 8 p.m., the Edible Education Experience is hosting a class on sticky toffee pudding, shortbread and more. Chef Andy Bates, a veteran of Food Network UK who now lives in Central Florida, will lead. At the start of class, you’ll be greeted with tea and scones, then get to work. All recipes are plant-based and, though the class will work with dairy, can be made dairy-free at home. The class is $70 per person and you must be at least 18.