For Disney fans, it isn’t the changing leaves or cooler temperatures that signal the arrival of fall. It’s the Mickey pumpkin wreaths that line Magic Kingdom’s Main Street, U.S.A. and the appearance of everyone’s favorite Disney Halloween treats.

Even with Mickey’s Not-So-Scary Halloween Party being canceled this year due to the coronavirus pandemic, Disney isn’t letting the season slip by without a few festive touches. Halloween decor, dishes, and drinks are already popping up at all four parks and will be available through October 31.

Here’s a sampling of spooky Disney Halloween treats to whet your appetite, and Disney Parks Blog has the full list of options so you can plan your visit accordingly. Our only advice is to come hungry!

At first glance, the combination of flavors in the Poor Unfortunate Souls Float (pictured above) may sound odd, but the mix of  cream cheese soft-serve, black raspberry syrup, and Coca-Cola has been getting rave reviews. Themed after Ursula the Sea Witch from “The Little Mermaid,” this float comes topped with an edible golden crown and pearlescent purple candies. 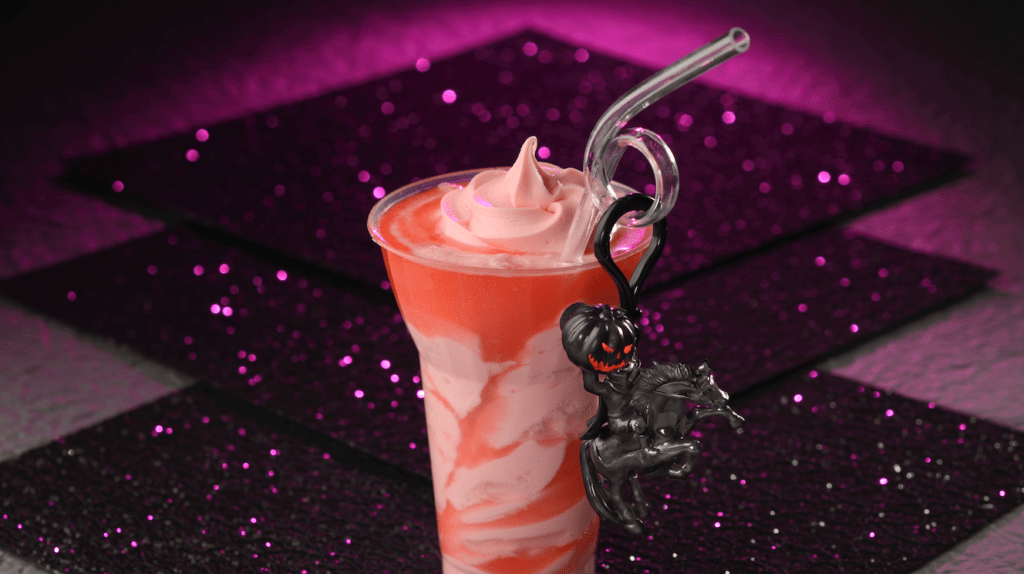 Sunshine Tree Terrace is the place to go in Magic Kingdom for fun-flavored floats like the Citrus Swirl. This year, they’ve put a frightening twist on the classic frozen treat with the Headless Horseman Rides Again. This float combines Strawberry Dole Whip with Fanta Strawberry soda and comes with a keepsake Headless Horsemen novelty straw. 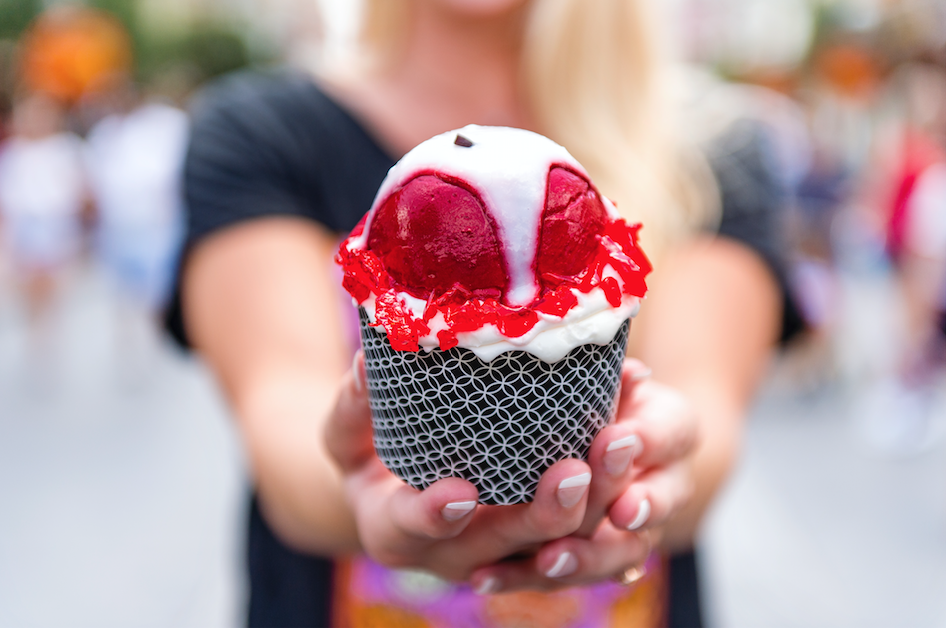 Unless an evil witch approaches you with this Not So Poison Apple Cupcake, there’s no reason to be afraid. Made with moist spiced-apple cake and topped with a huge mound of sweet and crunchy pecan buttercream frosting, this cupcake is more delicious than dangerous. 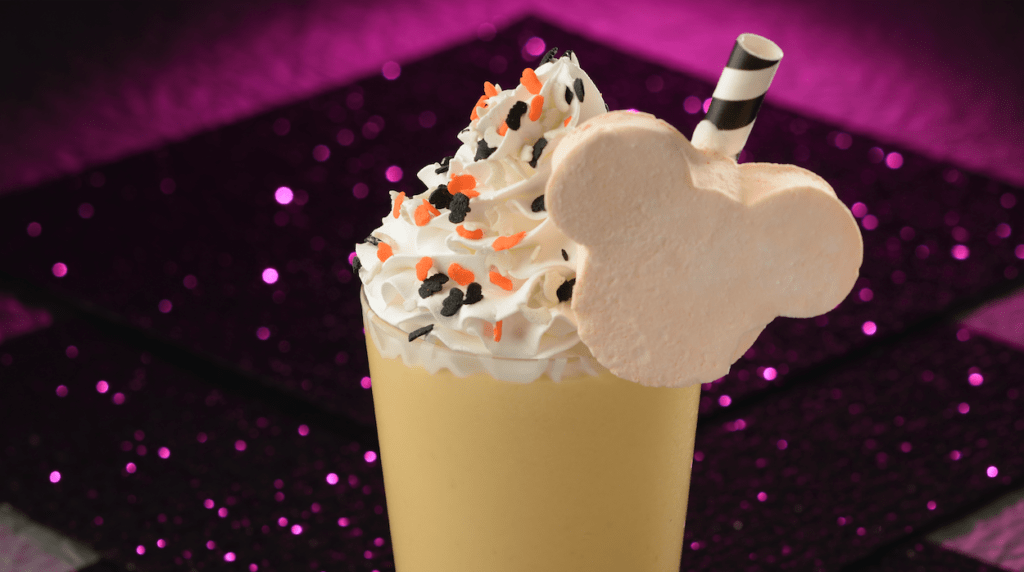 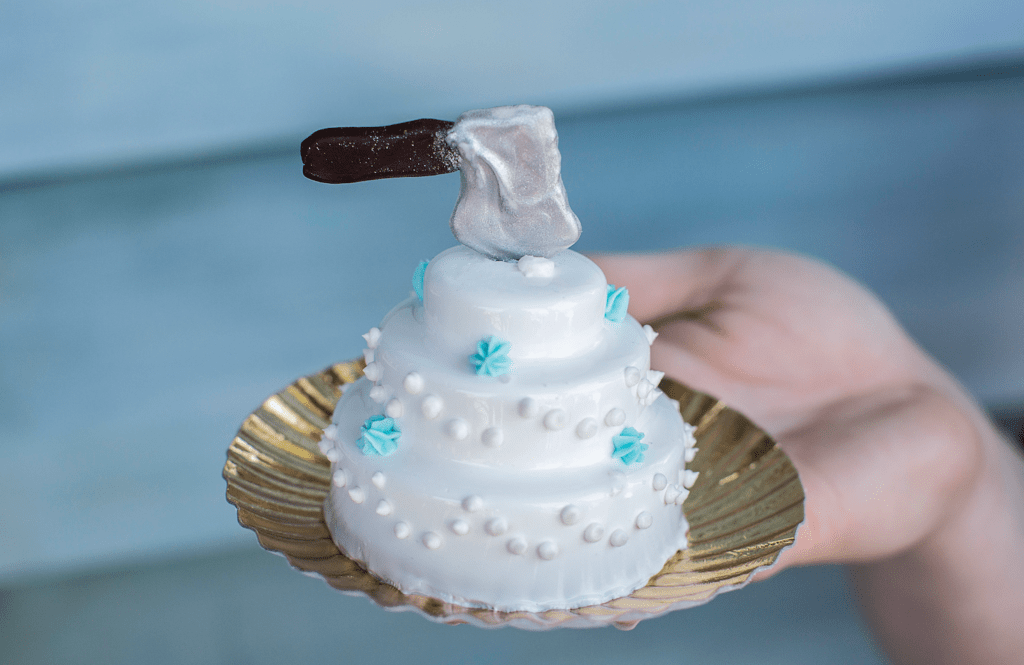 Constance Hatchaway is one of the more infamous Haunted Mansion stars. Sadly for her betrothed, she has a bad habit of using her hatchet to move from one husband to the next, hence the red raspberry Bavarian cream and chocolate axe atop this citrus-scented cake.

This killer cake is available at Liberty Square Market, not far from Constance’s permanent residence inside the Haunted Mansion. 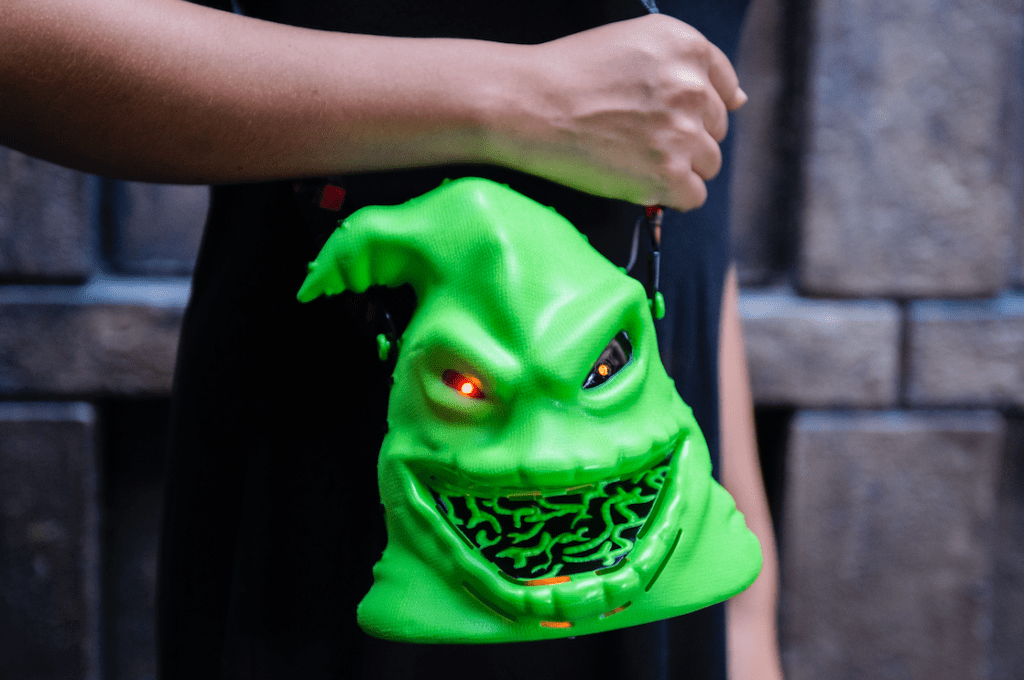 Disney always has the best popcorn buckets and this year’s Halloween options are no exception. There’s an Oogie Boogie bucket with glowing eyes (pictured), a much friendlier Mickey pumpkin bucket, and even an oozing cauldron bucket to name a few.

Like all of Disney’s refillable popcorn buckets, you can bring your bucket back to any popcorn stand and get a refill for just $2. 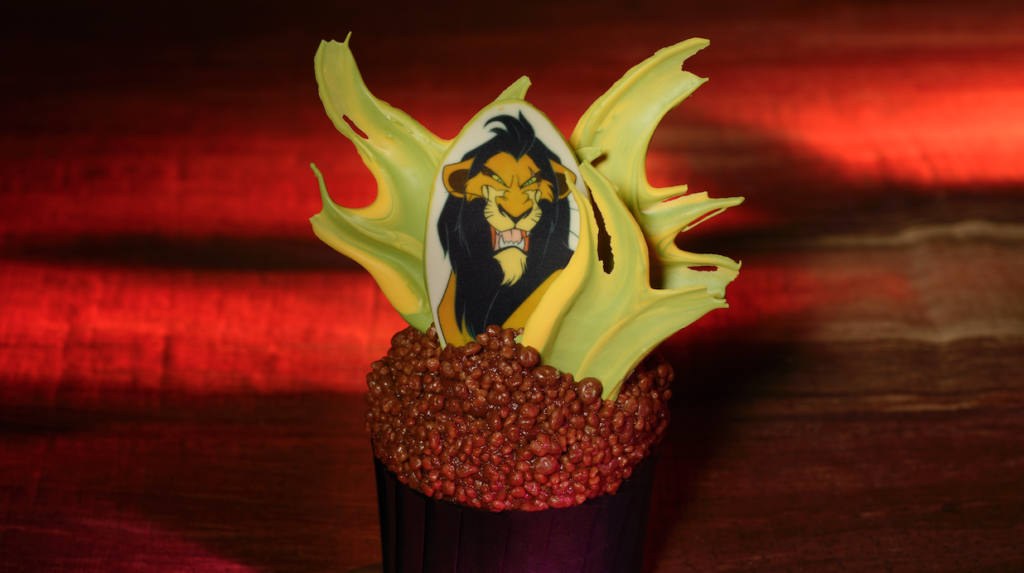 Halloween at the Most Magical Place on Earth is all about celebrating Disney villains. With a toasted marshmallow filling, chocolate marshmallow frosting, chocolate “pebbles,” white chocolate flames, and an edible lion, this red velvet cupcake makes Scar a star. 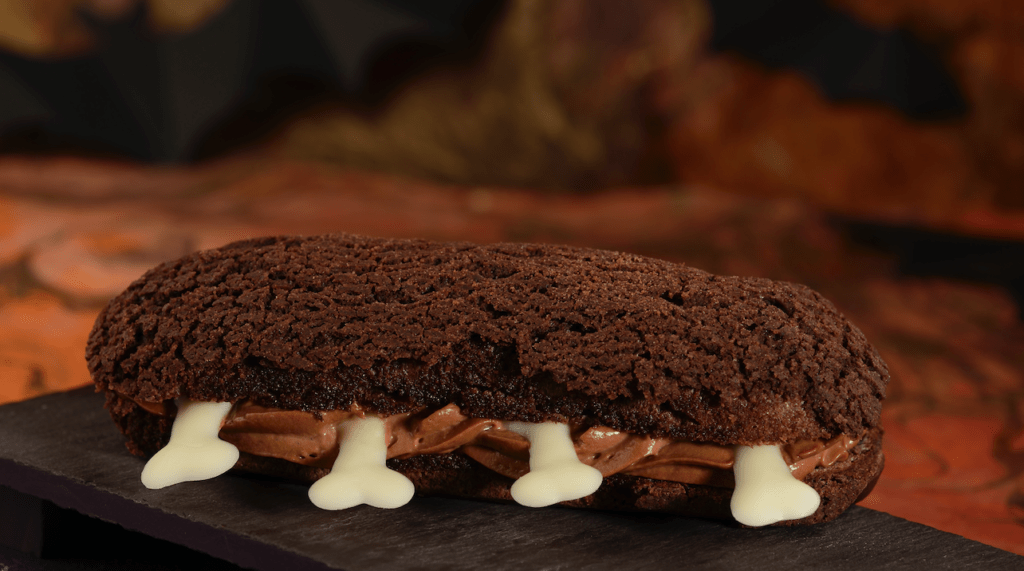 The Box of Bones Chocolate Éclair is a chocolate French pastry filled with dark chocolate mousse. To give it a Halloween twist, Disney chefs added white chocolate bones. If you love any and all forms of chocolate, this Disney Halloween treat is the devilish dessert for you.

If you stop by Rosie’s All-American Café, Backlot Express, or PizzeRizzo at Disney’s Hollywood Studios you can sip on an adult or kid-friendly Frozen Apple Cider. Both come with a keepsake poison apple glow cube, and the alcoholic version (pictured) is topped off with a generous splash of Crown Royal Regal Apple Canadian Whisky. 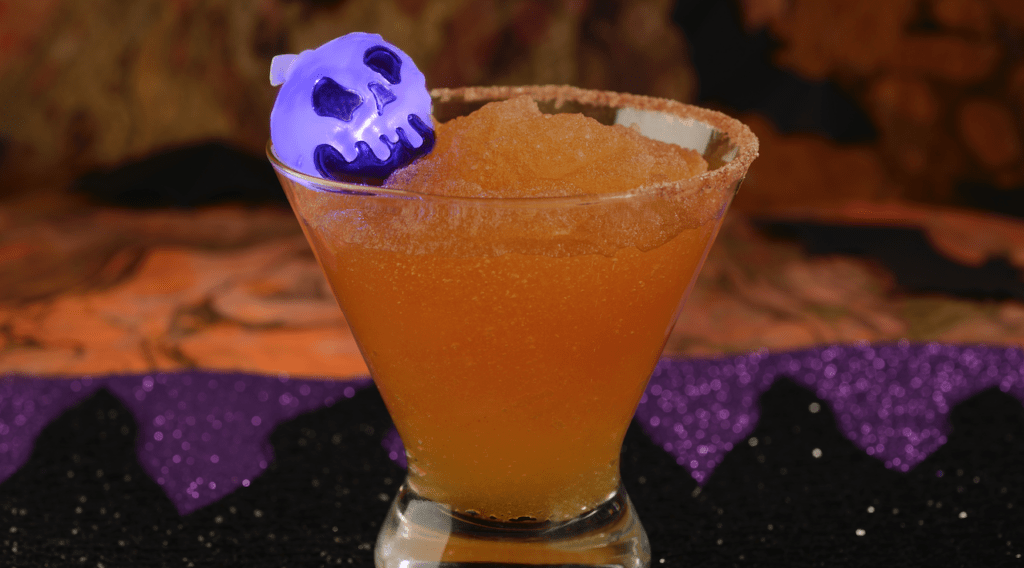 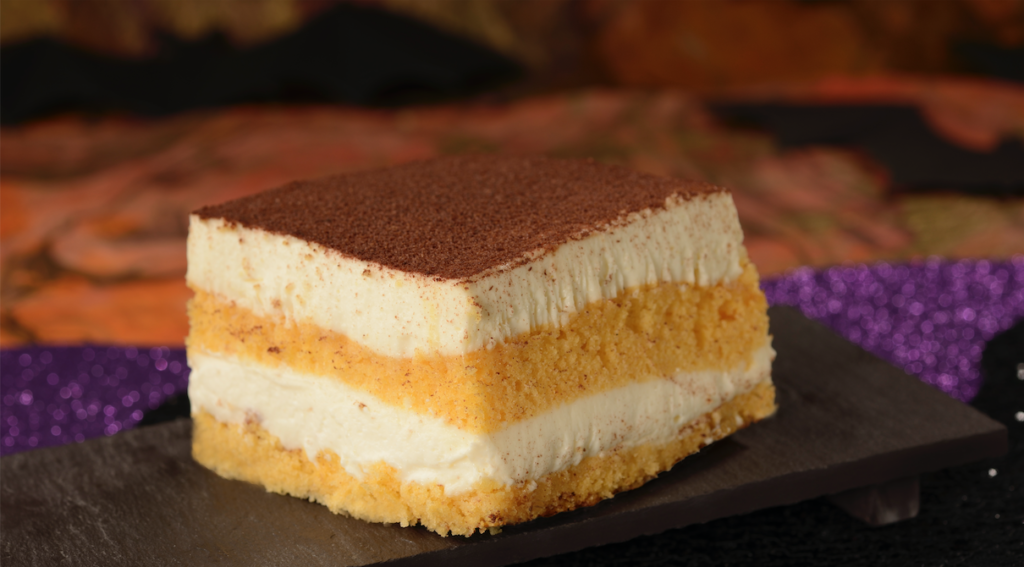 Tiramisu is a delicious, layered no-bake dessert that originated in Italy. Disney’s fall-inspired Tiramisu is made with layers of pumpkin-spiced cake and mascarpone cream and the top is dusted with a fine layer of cocoa.

For more info on area parks, check out our visitors guide.