Salt Rock Grill in Indian Shores, an exceptional dining experience two hours’ drive from Orlando but worth every mile, lives by the maxim of its late, sometimes lawless, always colorful Executive Chef. 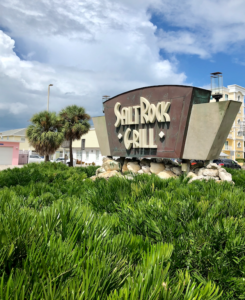 General manager Paul Raybold recalled, “Tom Pritchard used to say ‘Take no shortcuts. The road to a failed restaurant is paved with shortcuts,’ he said.”

Pritchard was unfazed by competitors stealing his recipes, Raybold added, “because they would cheat the recipe, skip a step or get ingredients out of order and screw it up. That wasn’t Tom.”

And so uncompromising recipes and an up-standard culture that Pritchard burnished into Salt Rock Grill from the usual beach places is undimmed from 2015 when Pritchard passed away and Florida restaurants lost one of their most creative and influential voices, a mentor to young chefs around Tampa Bay. 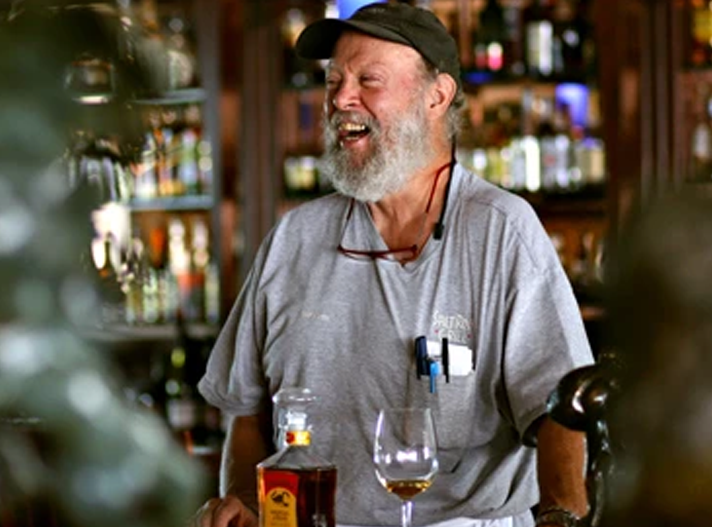 A mentor with a rap sheet, we should add, who occasionally in his remarkable 74-year life found himself closer to prison stripes than a chef’s apron.

On an Army tour of duty in Europe, Pritchard wound up in a military brig for impersonating a general. Another time he defaulted on a bank loan in Denver, took an alias and fled to Juarez, Mexico. Pritchard stories could fill a book, and maybe one day will.

Lying landed him his first real chef role in the F&B industry. The resume, the references, his culinary chops – all contrived. But the Rusty Pelican in Miami bought it. “You just say you worked at Le Cote Basque and trust they won’t call,” he told a reporter.

Pritchard was a character but as a longtime Tampa Bay dining critic put it “when Tom got here there were plenty of restaurants but not so many people who call themselves chef. What Tom did was make them excited and proud to be in a kitchen.”

Dayboats dock at the stylish, 425-seat restaurant on the Intracoastal with fresh-caught Gulf snapper, mahi and grouper from the night before. Down a ramp go the iced catches straight into a below-level, air-conditioned cutting room (no scaling/fileting in the hot Florida sun). Salmon is flown in fresh from the Pacific. Tuna is sourced from the Gulf Stream of the Atlantic. Hand cut steaks from the finest midwestern feeders age four to six weeks in an in-house aging room for maximum flavor and tenderness.

All are destined for grilling nirvana at the centerpiece of the restaurant: an all-natural pit fire burning oak, citrus wood and charcoals (no chemicals or fuels of any kind). Cooks work a wheeled pulley to regulate the grates, up or down, to achieve the perfect done-ness. Watching huge flames leap spectacularly from the coals usually stops most diners en route to tables. Dinner and a show. 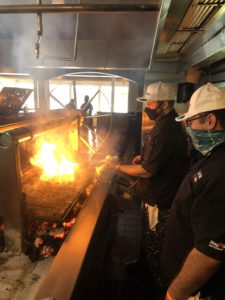 grilling and (not) chilling

Airy and contemporary, Salt Rock Grill boasts wide windows on the Intracoastal and the passing scene of recreational craft. At one of those waterside tables sat Rick and Lori Toenjes. Salt Rock Grill has been their go-to for 20 years, often boating here from their home in Palm Harbor.

“You trust it,” Lori said. “The atmosphere, the service, the menus – everything is quality here.” A favorite for the couple is steak tartare, a signature appetizer of Pritchard’s.

So strong is Pritchard’s imprint on the cuisine that any new menu item is put to the restaurant’s own checks and balances, Raybold says. “What would Tom Pritchard say? How would Tom make this better? What would he say when he spooned into the sauce? We hold ourselves to that standard every day.”

Robert Lebron, Executive Chef for the past five years and at the Grill for 21, worked at Pritchard’s side perfecting recipes with traditional flavors and creative techniques. Wide-ranging lunch, “Supper Club” and dinner menus present modern, yet authentic cuisine.

“Tom was a big influence on the kitchen, always full of ideas and stories,” says Lebron. “He inspired everyone to be go-getters, unafraid to change things, fix things, move things around. Whenever we’d try a recipe he’d say ‘try this instead, go outside the recipe,’ always looking to make it better. His motto was work with all the ingredients, roll up your sleeves, grit your teeth and just go.”

My grouper “K-Bob” – grilled to perfection – was paired with the Grill’s popular garlic mashed potatoes. Would you drive 120 miles for garlic mashed potatoes? These you would. The creamy spuds accompany most early-bird plates – from oven-roasted salmon to chicken “Rock ‘n Bleu” to baked scallops to dishes of just-caught fish.

Lunch on Day Two was an outstanding wood-grilled swordfish, nice firm-on-the-fork texture and basted with sun-dried tomato butter finished with fresh basil chiffonade. Truffled mac and cheese came baked in its own crock. Trust me, your tastebuds will do their happy dance.

Anchoring the Saturday specials, locals also love the snapper breast until it runs out, which it usually does. Flash-fired on the bone, it is the savory white meat off the snapper. 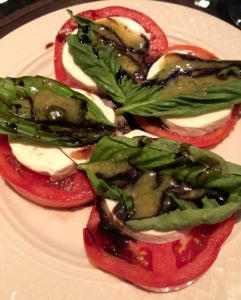 Overture to dinner was an agonizing choice from the raw bar (oysters from Cedar Key) and appetizer list that included “Kingston Trio” (marinated skewers of filet mignon, chicken and pork tenderloin), tuna sashimi, escargot, two soups (lobster bisque is ordered most but the grouper chowder was no slouch, flavorful and generous with fish bits). I went salad with a big and filling caprese (love those beefsteaks!) followed by calamari, simply splendid in a Thai chili sauce with roasted cashews (eat around the red peppers or have the ER on standby).

Entrees are a dizzying choice, including just caught black grouper and red snapper, scallop-crusted sea bass or lobster and shrimp sauté, to name but a few. Even the wood-grilled Alaskan king crab Legs come already split, drawn butter at the ready. 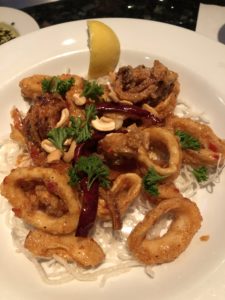 In a turf mood after all that surf, I peered past a tempting wood-grilled, bone-in ribeye and “Mile High” meatloaf to a tender filet mignon straight from the 1,200–degree pit to the plate, alongside grilled fresh asparagus. What Salt Rock Grill lacks in direct farm-to-table it makes up for in trophy steaks and fresh dayboat-caught seafood. This includes stone crabs when in season, October to May.

Until a new location just off the lobby is finished, look down! A glassed wine cellar may be viewed underfoot in the heart of the restaurant. Hundreds of labels are cellared. Wine Spectator has bestowed its Award of Excellence every year since 1999.

“He’s the voice in the back of our heads every day,” Raybold says. “He keeps us in the middle of the lane. Absolutely he’d approve.”

Salt Rock Grill is flagship of the Baystar Restaurant Group. Other Baystar locations include Clearwater, St. Petersburg and Oldsmar. For menus and more visit SaltRockGrill.com, open seven days phone 727.593.7625. Reservations highly recommended as are tables in the tiered and quieter main room or, in good weather, outside. Bar seating for drinks or meals. 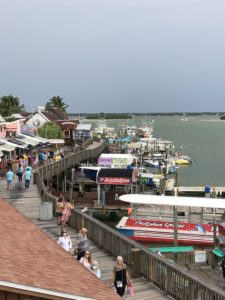 the boardwalk at John’s Pass

For beach lovers, lodging and entertainment choices abound along Gulf Boulevard. John’s Pass Village and Boardwalk is a touristy wharf area for casual dining and souvenir shopping. Boats and wave runners may be rented, or hop aboard a charter going after the big Gulf sportfish or viewing shipwrecks.