We’re feeling the wanderlust this week, the impulse to get out there and travel a bit. Now, we’re easy to please. Sure, we could board a non-stop flight to Knoxville and enjoy a weekend of barbecue and whiskey. We could also hop in the car and make a day trip of cookies and croissants along the coastal counties. That’s where you’ll find those yummy cookies up top, Pane e Vino in Melbourne.

On the other hand, we could just get out there around town for an afternoon beer festival or celebrate the Lunar New Year and enjoy some new food and culture. Edible Orlando writer John Graham  is always on watch for what’s new and about to break through in Central Florida. Here’s five ways to get out there for some food fun in the week ahead, Saturday to Friday.

It’s not just beer, it’s science! Saturday, 5-8 p.m., 30+ brewers will be in Loch Haven Park, serving up 150+ beers for the Science on Tap outdoor beer fest. A fundraiser for Orlando Science Center, Science on Tap will also feature hands-on live demonstrations of the chemistry and physics behind turning grain and yeast into beer. While OSC is usually all about the kids, Science on Tap is strictly 21+. Tickets are $60, but OSC members pay $50 and get in at 4 p.m. VIP passes are $90, but you get in at 3 p.m., as well as tickets for two full beer pours and food truck discounts. Both Scotty Long and Brown Bag Brass Band will play live.

Earlier on Saturday, from 1-5 p.m., Hourglass Brewing and the City of Longwood are staging the Florida SMaSH Beer Festival in Reiter Park. “SMaSH” stands for Single Malt and Single Hop. Each brewery must make and bring a one-off beer brewed with the same malt and hop. Should be interesting to see how differently they turn out. (The breweries will bring other beers too.) Proceeds go to A Spoon Full of Hope and Second Harvest Food Bank of Central Florida. Online ticket sales are $45, ending the day before the fest. Bowigens Beer Company of Casselberry and Marketplace at Avalon Park is one of the brewers joining in on SMaSH. Make sure to check out the Edible Orlando interview with head brewer Bob Bowen.

Year of the Tiger at Lake Nona Social 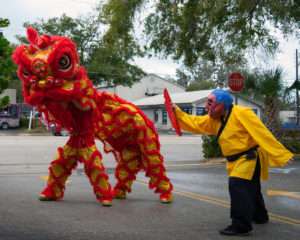 The Lunar New Year starts Tuesday, the Year of the Tiger on the Chinese calendar. Lake Nona Social is getting a head start on celebrating Saturday at Nona Adventure Park. The day will include lion dancing, a traditional gown fashion show, music, pan-Asian food vendors, and martial arts demonstrations. Tickets start at $8. 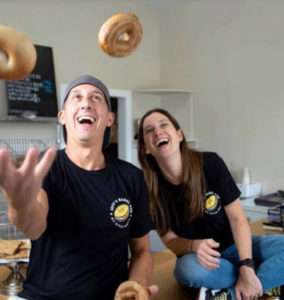 This Monday means bagels, bingo, and beer at Ivanhoe Park Brewing Company. Jeff and Danielle (pictured at right) from the popular Jeff’s Bagel Run in Ocoee will be calling bingo from 7-9 p.m. and bringing something they don’t usually do in their bakery – bagel sandwiches! The usual New York-style hand-rolled and boiled bagels will be available as peanut butter and jelly, Italian, turkey apple club, or … inside-out grilled cheese.

Ever been to a restaurant where there’s one menu but every table is different? That’s what’s going on Wednesday through next Saturday, Feb. 2-5, at Holy Trinity Greek Orthodox Church in Maitland. It’s called Tables Extraordinaire. Tables and chairs in past years have been fancifully themed as everything from sandcastles and carousels to vineyards and football stadiums. The menu is classic Greek dishes, lunch and dinner. You can also pay to just tour the tables or get your food to go. The whole thing wraps up with a gala dinner on Saturday, Feb. 5. Money raised goes to help Ronald McDonald House Charities of Central Florida, AdventHealth Transplant Institute, and the Holy Trinity Greek Orthodox Church Beautification Project.