In today’s world of artisan flatbreads and Neapolitan-style pies, it’s funny to think that 40 years ago, Stouffer’s French Bread Pizza was greeted with a collective WOW. The oblong frozen meals were a marked improvement over what children of the ’50s and ’60s ate.

But the idea of using baguette as a base for a pizza-style meal is one that we can still get behind. Chef Jessica Tantalo makes her own French bread pizza often, frequently with neither pizza sauce nor mozzarella. The one constant, besides good bread—even thick-sliced sourdough works well—is toppings that are “fresh in season,” whether winter tomatoes, blueberries with ricotta or the combo below. 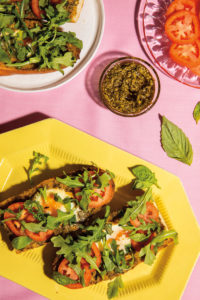