It takes a village to raise a chard.

Doubloons and emeralds notwithstanding, the starchy tuberous roots of the sweet potato can, in the right circumstance, be construed as buried treasure. Brent Buffington has seen it firsthand.

It was on a return visit to the Jackson Center Kids Garden. Summer break was over, and Buffington was there to see the children reap what they’d sown earlier in the season.

“We had a pitchfork,” he says, “but they were so excited they were on the ground, searching with their hands, and it was so fun to see them getting dirt under their nails, getting connected to this process that so many of us are removed from.”

Farming has sustained humanity for thousands of years. It’s only been in the past hundred, Buffington laments, that so many of us have lost our connection to the soil.

Through Growing Orlando, he hopes to re-establish the bond between the community and where its food comes from. Buffington is the nonprofit’s founder and executive director, but he’ll be the first to tell you it that it’s the collective effort of a tight-knit, likeminded collective that yields real results.

The volunteer-run initiative’s mission within the community is threefold: they grow, they teach others to grow for themselves and they incubate future farmers, giving them the knowledge to grow for others. 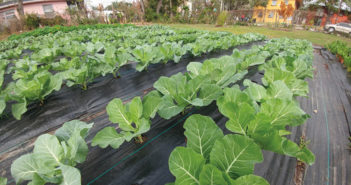 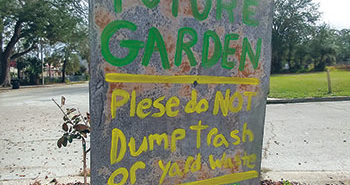 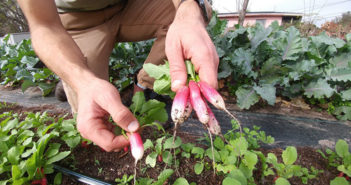 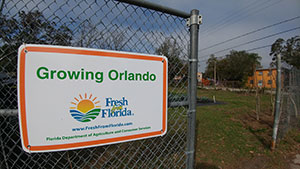 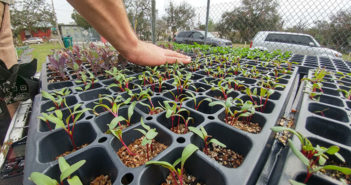 Buffington’s story began with a 1-by-8-foot garden that he and his roommates started while attending UCF. Its bounty: tomatoes and peppers. He hadn’t grown up with a green thumb, but the process, like sunlight on the soil, caused a seed inside him to grow. So, too, did the tiny farm. Before long, he got some chickens for eggs.

“We sold an extra dozen to some friends,” Buffington says. “And there was this point where I realized that what I loved doing could also feed people.”

Of course, he still has to feed himself. Buffington works three days a week at the Apple store, teaching classes on the brand’s various products and services. He spends roughly 20 hours a week at Growing Orlando’s urban garden in Parramore, a quarter-acre property they acquired in 2015.

Once an apartment complex, it was razed by the city a decade prior and sat, vacant, until the organization’s brigade began its transformation. Occasionally, Buffington says, they still find hunks of rubble from the farm’s former life.

Taryn Schmidt, 24, does tournament live streaming for the Golf Channel. She’s been volunteering since October, an Instagram-follower-turned-staffer.

“I was interested in the mission,” Schmidt says amid the rows of kohlrabi. “I’ve always been passionate about people having access to fresh food. And I’ve learned so much! I feel like I could go home and grow my own garden, but I live in an apartment, so I can’t—yet. But I plan to take the knowledge with me and apply it.”

“Every week I get something different and it’s always delicious. I feel like it tastes better when you grow it yourself.”

Initially, the produce went solely to volunteers like Schmidt, who happily accept fresh vegetables in exchange for time working the soil; the rest was donated to the Coalition for the Homeless, where the staff in its commercial kitchen happily integrates the local produce into its meals. In 2017, Growing Orlando supplied nearly 1,000 pounds of fresh vegetables to the organization.

“And now, with the Parramore Farmer’s Market—a big thing we’ve wanted to see happen since the beginning—we are selling produce and creating access to produce. And if our neighbors cannot buy the food, we encourage them to come in and volunteer and they can have access to it that way.”

The good news: Buying is easier than in years past.

“Florida has a double-your-dollar deal with Fresh Bucks,” Buffington explains. “Because they’re buying from a Florida farm, they are able to stretch their SNAP dollars to double the value. Right now the limit is set to $40, which means they have $80 to spend on fresh Florida produce. They can double their food budget to get fresh, organic produce that’s grown in the neighborhood.”

Other groups, including Hebni Nutrition, have a presence, as well, doing pop-ups to educate consumers on how to cook with what growers are bringing to market.

“We want to be the first stop when residents want fresh produce,” he says, “and if they can’t get it here, then they’ll go to Walmart. But we’d love to get them here as volunteers. I’d love to say, ‘Keep your money and come work in the garden.’ I’d much prefer that! I’d like to see everything here get done in two hours and have nothing left to sell.”

Buffington hopes to see more home growers, and those who may take the leap to farming, in the little garden on South Street. Courses and workshops—at press time a class on composting was on the schedule—are regular occurrences. Whether balcony container, raised bed or in-ground gardening, different models can yield similar—and successful—results.

“Growing food for others doesn’t have to mean farms,” Buffington says. “It could just mean growing a little more than you need—which isn’t any more work once you’re established—and trading with your neighbors.”

Schmidt’s excitement mirrors that of the Jackson Center kids when she sees the growth in real time.

“It’s great to get out of the air conditioning and do something with my hands,” she says. “And it’s cool to come here every week and see the progress. These things really blow up in just a week—it’s wild to see!”

Veteran farmer Buffington, who logged lots of apprenticeship time farming in Wisconsin before Growing Orlando was even on the drawing board, seems child-like in his enthusiasm, as well.

“We’ve come to this point where everything’s cleaned, it’s at the supermarket, it’s pre-bundled…” he says. “Then you start pulling vegetables out of the ground and it just feels—right. It doesn’t change with age. I get those moments, too! When you find that sweet potato in the ground, it feels like you found gold. It’s an exceptional experience that doesn’t change.”