Brandy Lynn Ford’s love for shave ice began on a trip to Kauai. While there, she frequently stopped at roadside spots for the powdery ice flavored with natural syrups and fresh fruit.

“When I came back to Central Florida, I didn’t intend to start a shave ice truck,” she shares. “I was just trying to find this treat, and nobody had anything close to it.” To start, she purchased a vintage, hand-cranked ice shaver (not an easy feat!) and developed her own recipes for friends.

The Beginnings of Hanalei Shave Ice

That life-changing vacation to Hawaii was inspired by her father Don, who grew up on the islands. He worked in taro fields and on sugarcane plantations and even made shave ice as a teenager in a Waimanalo supermarket — something Brandy didn’t learn until later. Based on serial numbers and identifying marks, there’s a serendipitous chance that the shaver she now uses once belonged to her dad.

Last year, Don’s health began to fail, and he wanted to return to Hawaii for hospice. In order to finance the move, Brandy bought a 1969 Shasta Loflyte trailer and opened Hanalei Shave Ice. Unable to make the trip, she ultimately brought her dad back to Orlando, where he enjoyed a back-yard luau and shave ice for breakfast before passing away in August.

Many people don’t understand the differences between the powdery flavored ice and a snow cone. “Shave ice is super soft and fluffy, kind of like compacted snow,” Brandy explains. Then, you add fresh ingredients to the top rather than only flavored syrup that drips all the way to the bottom. 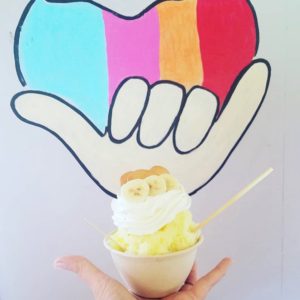 A chef at heart (she previously worked at Olive Garden, The Cheesecake Factory, and Reel Fish Coastal Kitchen), she loves creating her own recipes too. For local photographer Airam Dato-on, who championed her work from the beginning, she developed The Photographer. “He wanted an Earl Grey syrup and ube (purple yam) foam and ice cream at the bottom,” she says. “I tried 30 different Earl Greys to make sure that I have the one that gets the most bergamot in it.”

There’s also The Kanoa for Kanoe Greene, who was one of the first Hawaiians to visit the food truck and declare the shave ice authentic. Her flavor includes passionfruit, pineapple, and strawberry with ice cream and whipped cream on top with strawberries and pineapple.

Although Hanalei Shave Ice was initially a temporary business venture, Brandy now hopes to keep it open and is looking for a permanent spot. “You don’t ever want to take something that is a cultural treat and fake it,” she shares. “I want to honor my ancestors. I want to honor my father.”

A version of this article originally appeared in the Fall 2021 issue of Edible Orlando.