It only took Chef José Andrés two decades to build a restaurant at Disney World.

“I was here 26 years ago, and I tried over the years to get a Spanish restaurant in Epcot … I was not lucky, but I never gave up,” says Andrés. “The opportunity showed up three years ago and we didn’t hesitate; we said ‘let’s do it!’”

And is it ever worth the wait. Jaleo at Disney Springs elevates Orlando’s culinary status with an A-list chef, stellar architecture by renowned Spanish designer Juli Capella, authentic Spanish cuisine and the finest ingredients: hand-carved jamón ibérico de bellota, grassy olive oil, crimson saffron, cured meats and cheeses, olives and more, all brought from the homeland of Andrés. And as the restaurant settles in, Chef Rodolfo Guzmán Aranda is looking for locally sourced ingredients, too, such as the eggs they’re using from Lake Meadow Naturals in Ocoee.

With Andrés saving the world one meal at a time, Guzmán, a native of La Paz, Bolivia, has been at his side for 25 years, now running the kitchen at Jaleo Disney Springs, the fifth and largest Jaleo in the ThinkFoodGroup empire. Guzmán started at age 23 from the ground up—laying tiles—in the Washington, D.C., Jaleo. He graduated to dishwasher, then prep chef, then pastry chef and eventually, over more than two decades, rose through the ranks to head chef. (He also is a partner in ThinkFoodGroup’s Zaytina.)

Self-taught, fearless and inquisitive, Guzmán crafted his career “asking questions and checking out books from the library about Spanish wines, cheeses and cuisine,” all while working double shifts to learn every aspect of the restaurant business, from front-of-house service to ordering inventory. 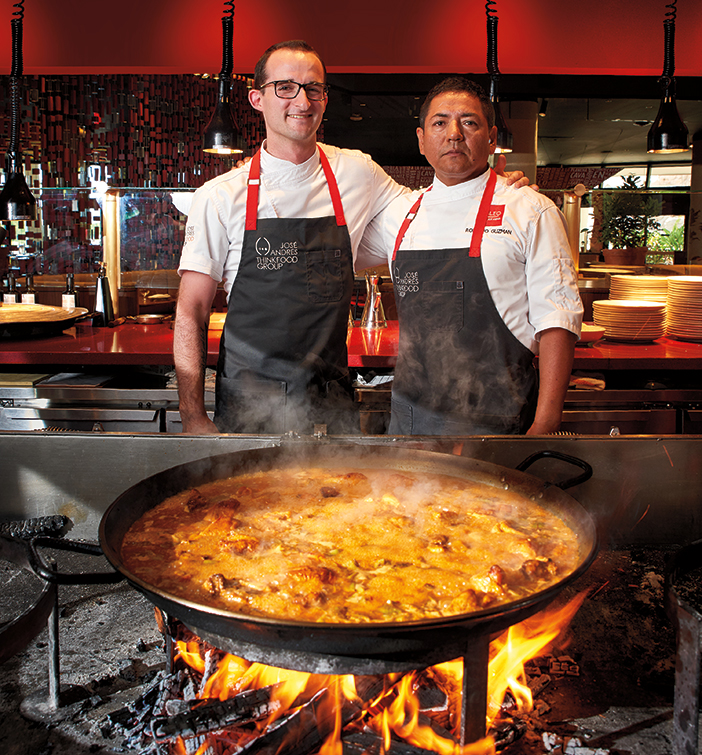 Early on, Andrés sent Guzmán to Spain to work at elBulli with Chef Ferran Adrià, and then to culinary school in the U.S. “José is a mentor, father and friend,” says Guzmán. Andrés’ reputation as a perfectionist with a standard of excellence keeps him on top of his game: “When he brought Alice Waters to Jaleo, I wasn’t worried about Alice Waters,” says Guzmán. “I was worried about José with Alice Waters, that everything would be perfect.”

And while he’s traveled the world with Andrés, he’s now firmly entrenched at Jaleo Disney Springs “for three to four years,” he estimates, before the next big thing. At 48, he and his wife and four children have relocated to Clermont.

In a blaze of red and yellow that celebrates the Spanish flag, Jaleo Disney Springs opened in March with a level of service, seriously good food and sophistication inspired by other Andrés restaurants. And while it’s Guzmán’s job to pay attention to the bottom line, it’s a balance. “We look for cost-effective ideas, but, in the end, it’s about the quality of the ingredients.” Andrés won’t cut corners on things like olives and anchovies, for instance.

If you are looking for Andrés’ legacy in innovation, just have a sip of Jaleo’s Salt-Air Margarita, crafted with a salty foam dolloped on top instead of salt on the rim (the foam is whipped with sucrose to keep its shape as you sip). And the popular aceitunas modernas y clásicas, ‘Ferran Adrià’ liquid olives that melt in your mouth. But Jaleo is about much more than innovative cuisine—it showcases the rich, regional diversity of traditional and contemporary Spanish cuisine, including authentic paellas cooked over a wood-fired pit. 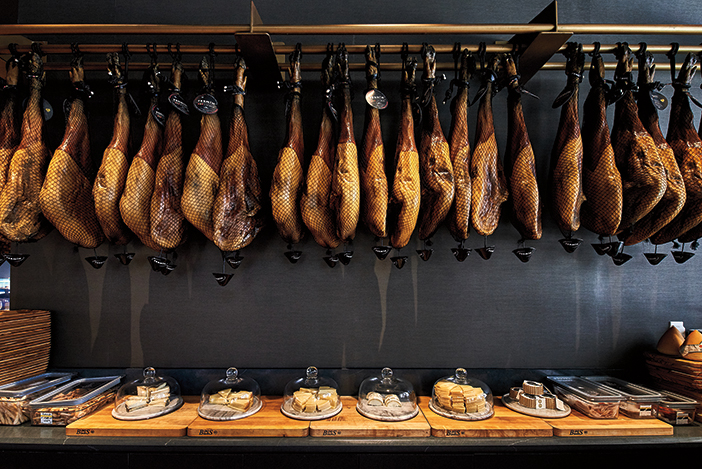 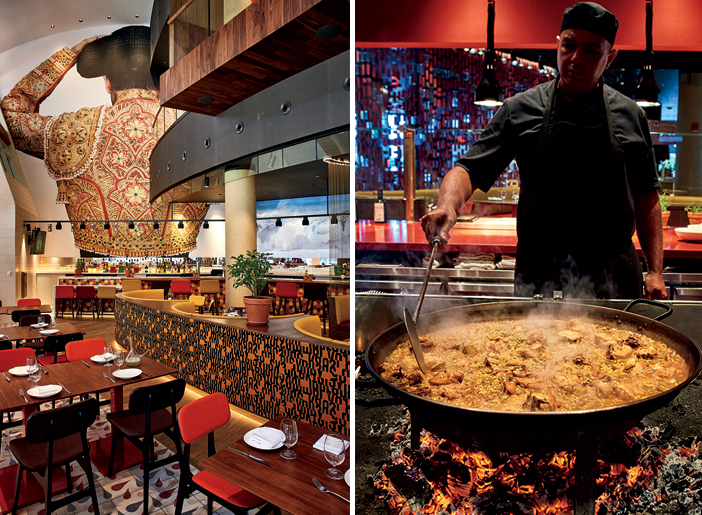 With 150 wines and 65 dishes on the menu, most guests go for what they know, so best sellers are pan con tomate made with bread imported from Spain, the classic tortilla, paella and patatas bravas. For Guzmán, standouts are the simplest: endive with fresh orange, goat cheese and almonds; head-on shrimp sautéed with garlic and chili and chicken croquetas that take two days to perfect.

“My blood is Bolivia, my heart Argentina [where his wife is from], my spirit America and my ideas Spain,” says Guzmán. “America gave me everything.”

And on a rare night off, what would he cook at home if José Andrés were a guest? “Soup,” says Guzmán without hesitation, “with pine nuts and noodles.”