By Edible Orlando on January 4, 2019 Features 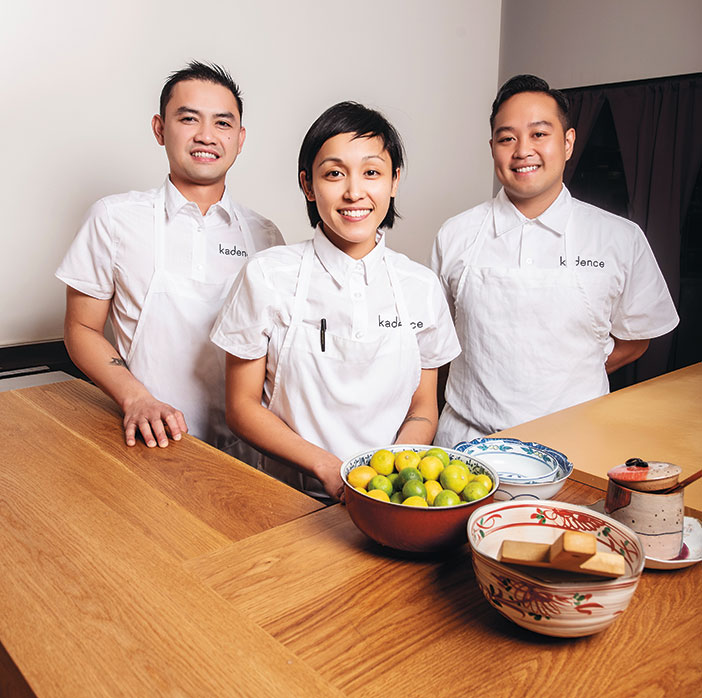 Three chefs elevate their guests to the next-level sushi experience in Audubon Park.

Served in a golden-rimmed glass bowl, a dollop of black caviar tops a pink disk of hand-chopped toro. A few green threads of scallion and shiny flakes of edible gold garnish this elegant dish. Mmm … a bluefin tuna belly and Siberian sturgeon roe is a match made in heaven. Together with several other luxurious courses, toro tartare preludes more than a dozen different kinds of sushi, a soup and two desserts. The detailed dinner menu at Kadence is a secret.

The restaurant specializes in high-end sushi, omakase style. In Japanese, omakase roughly means “to trust the chef.” At Kadence, it translates into the ever-changing, multi-course tasting menu, which is not revealed until you dine. The evening sushi experience lasts two and a half hours. Space is limited. There are only 10 seats per show available through a ticketing system sold online. 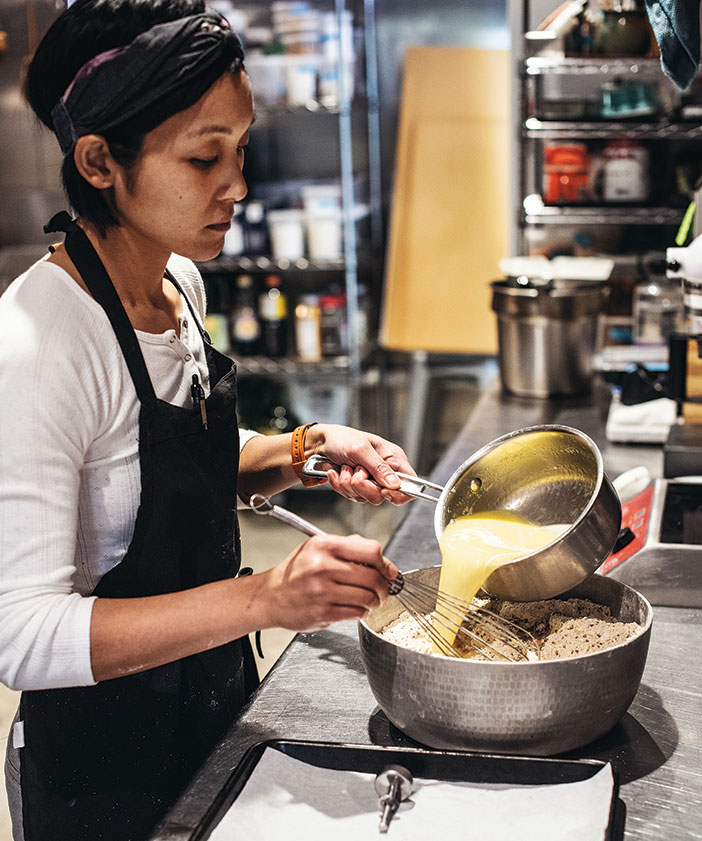 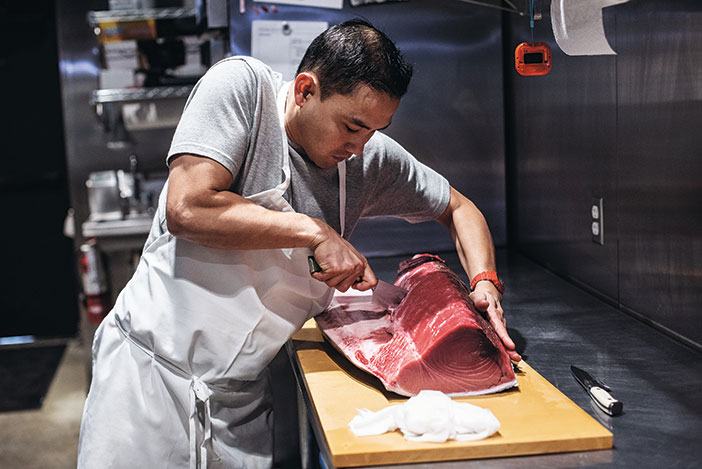 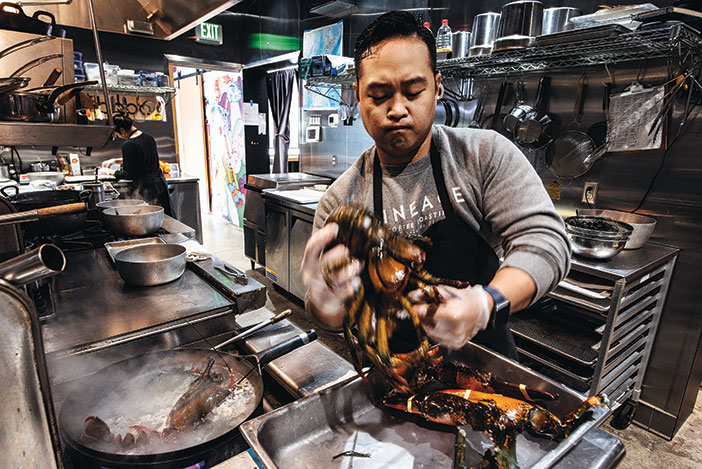 Lordfer Lalicon, Mark Berdin and Jennifer Bañagale—chefs, hosts and owners of 1-year-old Kadence—had a dream. “We came up with the name about 10 years ago when we lived together in New York,” recalls Jen. Kadence is a portmanteau blending two words: decadence and cadence. The decadent part derives from all three chefs hopping around several Michelin-starred restaurants, some of which were Japanese. Hop! hop! Morimoto and 15 East in Manhattan. Hop! Umu in London. As to the cadence part, it refers to their rhythm as they work. “In the kitchen, we try to meet each other without talking, so it’s like dancing with each other,” explains Jen. Before Kadence, the trio practiced their steps at Kappo, their first sushi bar at East End Market. Then, while building their dream restaurant, they boogied in Miami and around Orlando as a pop-up.

In harmony, each partner brings to the kitchen a different set of moves. Mark, the head chef of Kadence, is a sushi master trained in the art of kaiseki—the traditional Japanese haute cuisine. Lo knows French and Italian cooking techniques. Jen delicately sweetens it all as pastry chef.

To serve dinner at 6 p.m., the team joins forces in the morning. Scaling, filleting, curing, cooking, smoking, infusing—about 90 percent of preparation is done before guests arrive. First and foremost are high-quality ingredients. “Our fish is flown in from Japan twice a week and we get it whole,” reveals Lo. Some crab and mullet are local. So is shrimp supplied by Wild Ocean Seafood Market. Farm-fresh mizuna, Purple Osaka and other leafy greens come to Kadence straight from Frog Song Organics near Gainesville.

In addition to Japanese catch and Central Florida bounty, Lo, Mark and Jen reflect seasonality through their collection of tableware. “In the summertime we try to use more glass plates, and in fall and wintertime more ceramics,” says Mark. Unique plates, bowls, teacups and ikebana vases are the result of Kadence chefs’ collaboration with Orlando potters: Check out the locally crafted tanuki, a Japanese folk beast said to bring good fortune. It’s made of wood by an artist named Boy Kong. 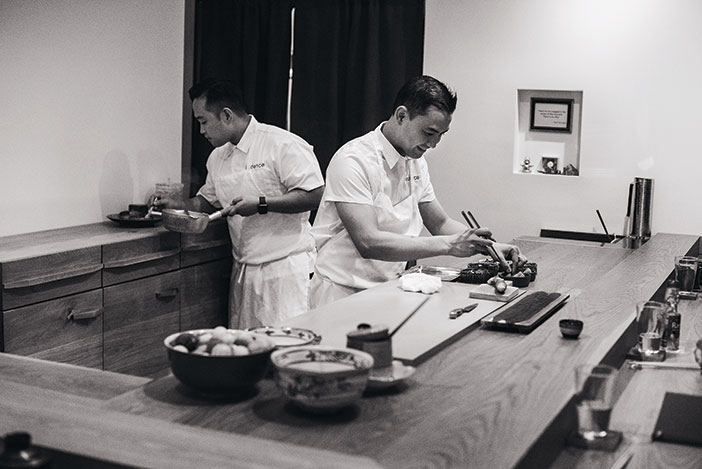 Lo is holding a sauce for ankimo, a pre-sushi dish with monkfish liver while Mark is using moribashi, special chopsticks to plate his cured Japanese red snapper. 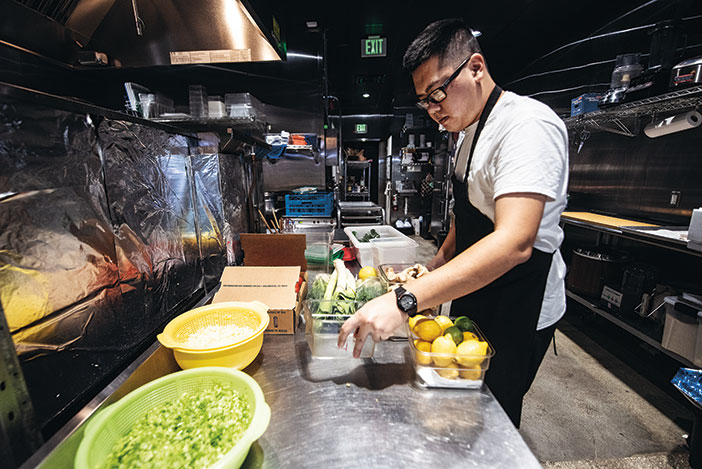 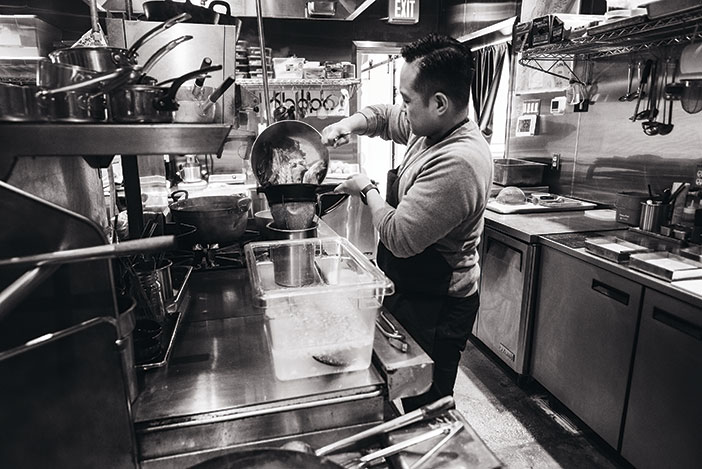 Another intriguing detail about Kadence is the chefs’ eclectic soundtrack. Their music eases conversation. A fine sake menu further detangles tongues. The best way to enjoy this Japanese beverage made of fermented rice is to let Jen, who is a certified sake sommelier, decide. “I frequently start with Awanigori, which is sparkling, so kind of your Champagne sake,” she explains.

Halfway through the dinner, after oysters, lobster and monkfish “foie gras,” Mark and Lo bring to their stage fish, rice and sharp knives. Before too long several shades of pink flesh cover two cutting boards. Some pieces have small parallel cuts. “We score certain fish that has tough skins or flesh,” says Mark. In choreographed moves, both chefs hand-form nigiri—a small ball of vinegared rice with wasabi and fish on top. They brush nigiri with their house soy sauce and serve it at once. From lean tuna to pickled mackerel, guests experience traditional Japan in a perfect bite after bite after bite. In one sitting the chefs offer about 30 different ingredients including such luxuries as sea urchin, roes or truffles. In the cooler winter months, a Japanese delicacy called shirako thickens a delicious clam chowder. No need to know what shirako is ahead of time. Trust me on that one. 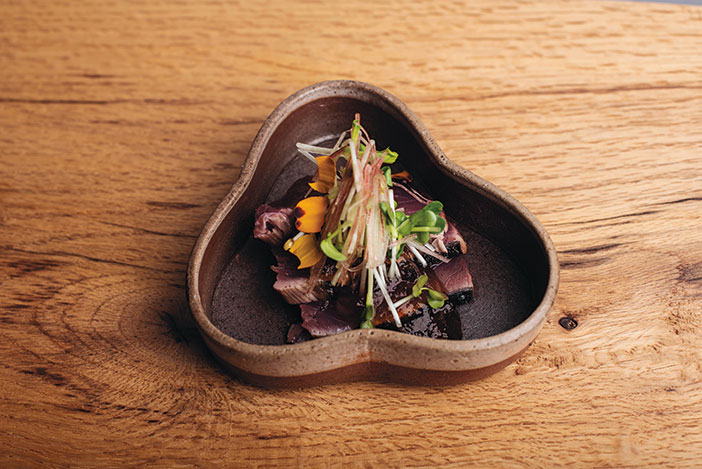 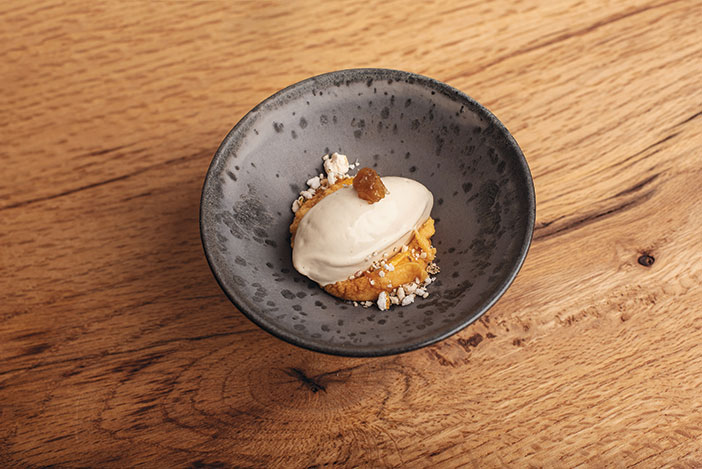 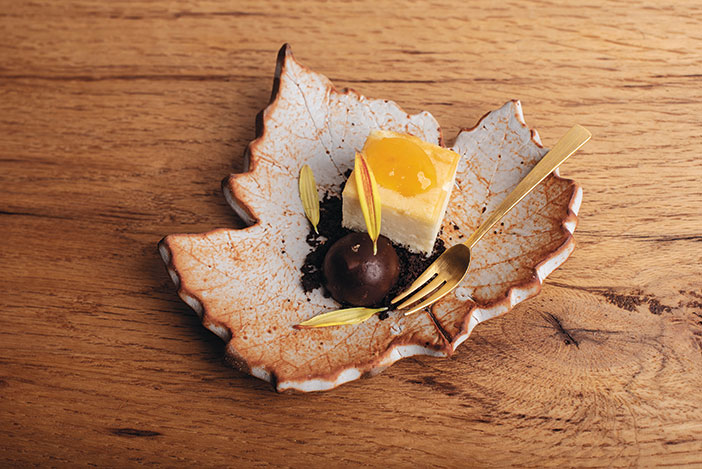 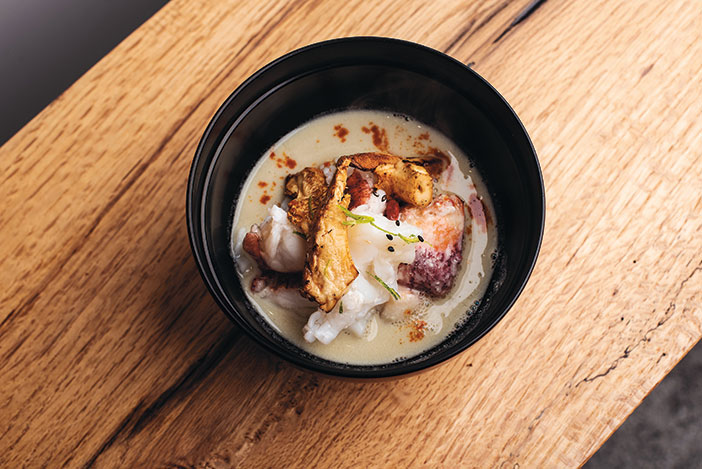 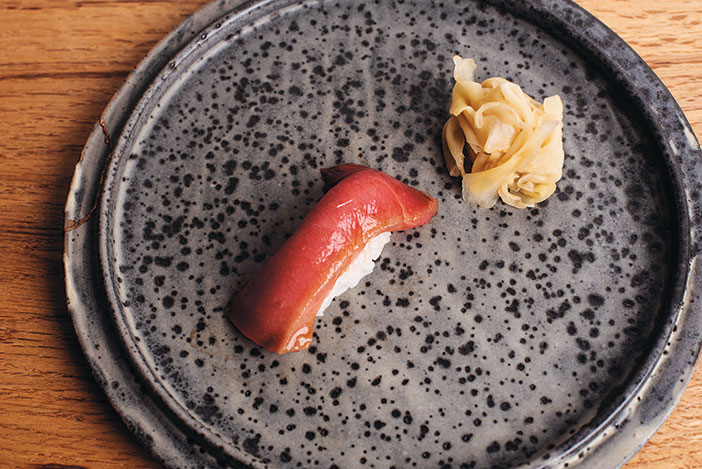 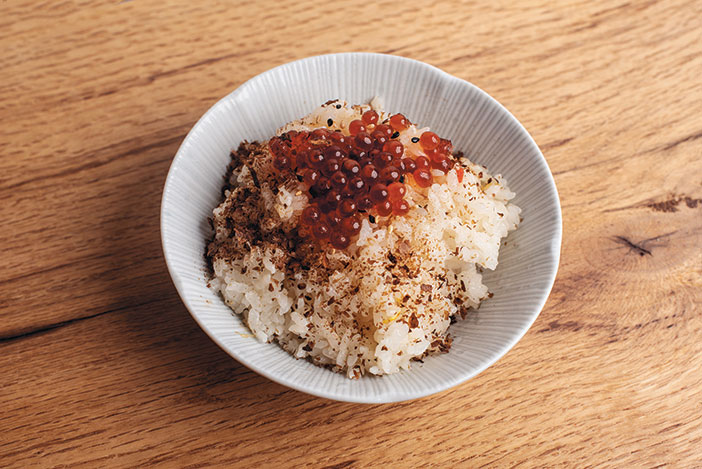