This is a recipe from years ago from the bar menu at The Ravenous Pig, that originally appeared in the magazine in 2013. It’s still a favorite of ours, and a perfect party starter in the warm spring and summer months! It would also be a perfect pairing for our Fish and Tropical Salsa.

1  Moisten rim of a rocks glass with a lime wedge. Dip into Cilantro Sea Salt.

1  Preheat a grill to medium heat. Grill peaches until very tender. Roughly chop and place in a blender; blend until very smooth. 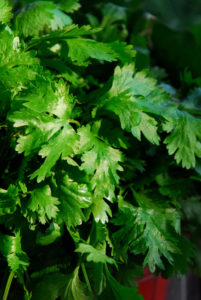 1  Preheat oven to its lowest setting.

2  Place cilantro on a sheet pan and place in oven for 1 hour, or until cilantro is brittle and dry.

3  Crumble cilantro and stir into salt.