While fried plantain chips originated in West Africa, the thicker, twice-fried version known as tostones or patacones are beloved throughout Latin America, where plantains were introduced during the Colonial Era. This is just one example of foodways that students explored during a week-long intercession class on Florida Immigrant Culture and Cuisine at Rollins College, taught by Dr. Rachel Newcomb, a professor of anthropology who also blogs about food. Each day, Dr. Newcomb invited a chef who resides in the area to cook a dish from their culture for her class and share their experience as an immigrant to the US.

One such guest was a Rollins student named Italia, a DACA student who came to the US from Colombia as a child along with her family. Her mother, who is also named Italia, showed the students how to make her version of this hearty Colombian dish of patacones topped with a saucy mix of chicken, onions and peppers. With an extra pair of hands, you can make enough for a crowd in under 30 minutes. Both mother and daughter enjoy pairing this meal with a Colombian soda such as the apple-flavored Manzana Postobon or Colombiana, a champagne cola. Look for the soda and other ingredients at a local Latin market. 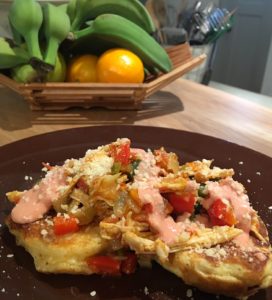 The final dish is topped with “pink sauce,” a tasty combo of ketchup and mayo that midwesterners refer to as “fry sauce.”

salt and pepper to taste

Prepare tostones according to package directions and set aside to drain on paper towels. Meanwhile, place chicken breasts in one layer in a shallow pot along with salt and whole garlic clove and cover with cold water. Bring to a boil, skim foam from surface, and then simmer uncovered for 20 minutes or until chicken is just cooked through. Remove from liquid and place on a plate to cool while you cook the sauce. 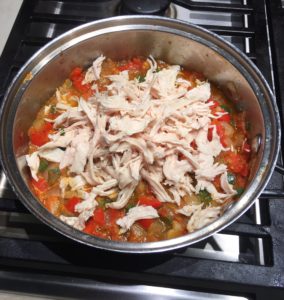 Shred the chicken by hand for the tiniest pieces.

In a separate pan large enough to hold all of the chicken and vegetables, heat the canola oil and gradually add the chopped vegetables except the tomatoes and sautee until softened but not browned, about 5-7 minutes. Add the tomatoes and spices, and simmer until sauce is slightly thickened, about 5 minutes. Meanwhile, shred the cooled chicken by hand, following the grain in order to make the smallest pieces possible. Add the shredded chicken to the sauce and stir to combine, then add salt and pepper to taste.

To assemble: Mix ketchup and mayonnaise together to make “pink sauce.” Place two tostones slightly overlapping on a plate and top with approximately ¼ cup of the chicken and sauce. Top each serving with a dollop of pink sauce and sprinkling of parmesan.