A food writer and a chef set out to find the best tacos in Central Florida.

My parents have lived in Webster, Fla., for more than 15 years. Webster is a tiny town whose population triples every Monday, when Swap-O-Rama, the enormous flea market opens, selling everything from mismatched silverware collected over 40 years to carburetors from 1987 Dodge Daytonas. The town is in Sumter County, and to get there, you can either take the turnpike and wind through oak-lined roads that bear numbers instead of names, or simply drive down Highway 50 (known to us Orlandoans as Colonial Drive) forever and ever, and eventually turn right. Then you’re there.

The Trip to Webster

The latter is my favorite path—there’s so much more to see, people to watch, small-town culture to spy from my car’s quiet cabin. Once, while driving to see my parents, I remarked to my husband, “There are SO MANY taquerias. And they look legit.” We counted seven or eight on our way to Webster on either side of the road, leaving Clermont and passing through the citrus towns of Groveland and Mascotte (don’t blink or you’ll miss them!) on our way to Webster.

South Lake County is largely agricultural and industrial, home to migrant workers who maintain and harvest citrus, soy and other crops, as well as care for cattle and other livestock. It’s a part of Florida where collars are blue and votes are red, with plenty of hardworking people doing back-breaking work. On closer look, it’s no surprise that Mexican food is prevalent here—many just want a taste of home.

Every time we passed the taquerias since then, I’ve longed to pull over and order a plate. I imagined pillowy white corn tacos topped with tender lengua—cow’s tongue—grilled on a flat top with plenty of crispy bits, topped with cilantro and onions alongside squeeze bottles of salsas rojo y verde. But we always seemed to be in a hurry to get to our destination, so it never happened. I planned to make a road trip of it. If I couldn’t make tacos a side trip, I’d have to make them a priority. But I needed the perfect partner-in-crime … or, partner-in-lime, as it were. 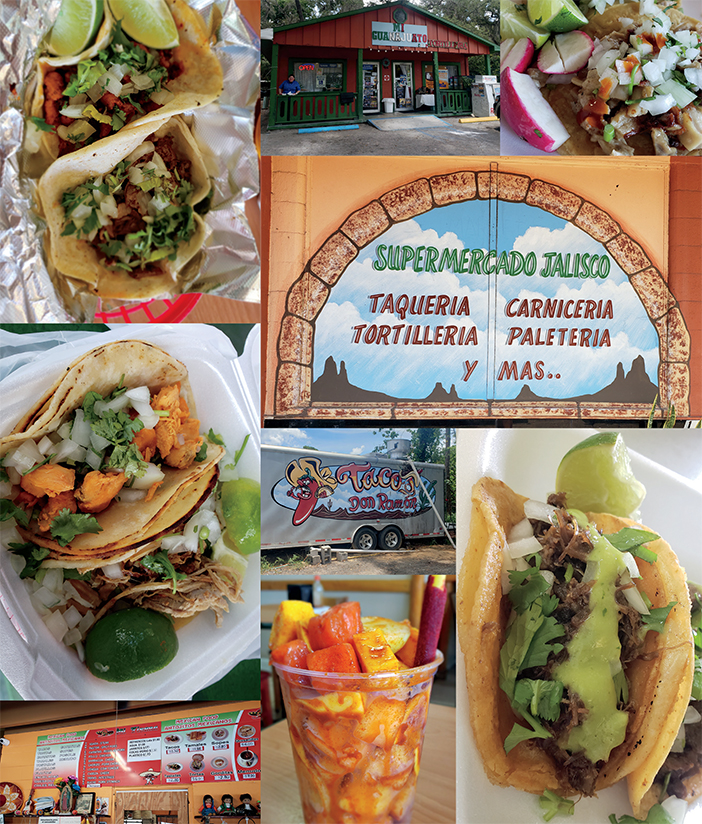 Chef Wendy Lopez and I have known each other for a long time. We met while she was executive chef at Tapa Toro, a destination Spanish restaurant on I-Drive. While there, she unwittingly became somewhat of a local celebrity chef, even moving on to the national stage as a winning contestant on Food Network’s competition show Guy’s Grocery Games, hosted by Guy Fieri, on which she appeared twice.

She’s since moved on to become executive chef at Reyes Mezcaleria on North Orange Avenue, where she dazzles local regulars with head-turning, innovative Mexican dishes (rumor is that braised duck tongue tacos are headed for the menu) and inspiring partnerships with other Orlando culinarians like Chef Shaun Noonan of Dixie Dharma, with whom Wendy recently collaborated on an all-vegan Mexican menu.

Wendy is originally from Michoacan, Mexico, a coastal-desert state that lies between Guadalajara to the west and Mexico City to the east. She moved to the U.S. with her parents as a child, first to Georgia, and then to Palm Coast, Florida. Her grandparents owned a Mexican restaurant, and her parents eventually opened their own eateries, so Wendy was always around food and the kitchen life. It never even occurred to her that she wouldn’t be a chef one day. “I went to culinary school [in Orlando]because I wanted to learn a new way of doing things. I knew the way my parents did it, but I wanted to dive deeper,” she told me.

The Best Tacos in Central Florida

When I had the idea to do the taco road trip, it was Wendy I thought of first.

“What do you think?” I said. “You wanna drive down Colonial and find the best tacos in Central Florida?”

On a blazing-hot May afternoon, we hopped into my SUV, tamarind-flavored Jarritos sodas in hand to set the mood, and headed west.

Here’s where and what we ate, and how you can re-create our epic excursion.

The original El Tarasco is in Haines City, but this outpost had a full menu of Mexican specialties Wendy recognized from her childhood days, like the braised pork in salsa verde from the lunch buffet line. Of the 10 tacos on offer, we tried four: lengua, tripa (tripe), al pastor and birria ($1.79 each), a new experience for both Wendy and me. Birria is a Jaliscan specialty usually made with goat or mutton, but El Tarasco makes theirs with beef. I swooned over the taco con tripa. The crispy fried bits of intestine would make a fabulous bar snack in place of chicharrones. El Tarasco also serves cut fruit topped with hot sauce and Tajin seasoning, which was irresistible. 470 FL-50, Clermont, (352) 404-7632

Located in downtown Groveland, this taqueria sits in the back of a grocery store with a handful of tables and a rather striking mural of an Aztec warrior on the back wall. A couple of tias worked the stoves in the back, and also took our order (you pay at the front of the market when you’re finished eating). Here, we tried barbacoa, chorizo, carnitas and carne asada tacos ($1.49 each). The chorizo was the hands-down favorite, with plenty of crispy sausage bits and excellent spice. Wendy pointed out the molcajete at each table full of roasted red chiles to grab by the handful and crush as you desire into your meal. 110 E. Broad St., Groveland, (352) 429-5579

It was impossible to pass up some of the more unique offal on offer at Mi Tierra, a standalone building on a dirt parking lot promising “antojitos Mexicanos.” There’s a telenovela blasting, kids running in and out from riding their bikes out back—it feels like a comfortable spot to get out of the heat and relax. Here, tacos are all $1.50 each, and we loved the tender cabeza (pork cheek) and barbacoa. But it was the cow’s stomach known as buche (pronounced boo-chay) and the stewed chicharron that really got our attention. The buche certainly carried that aroma of cooked innards, but truly tasted like the best of a backyard barbecue. Adventurous eaters will find the chicharron bragging-rights-worthy—not for the flavor, which is fabulous, but for the gelatinous, toothsome texture. The tortillas here are yellow corn, and, Wendy and I both agreed, were the best of the day, with pronounced flavor that can only be described simply as “corny.” 856 E. Myers Blvd., Mascotte, (352) 429-3040 find the best tacos in Central Flori

There isn’t much space to walk in the kitchen at this cute spot under some towering live oaks, likely over 100 years old. That’s because most of the footprint is occupied by a commercial tortilla maker. It’s churning out perfect, fresh tortillas for the line of workers waiting for their tacos ($1.49 each), quesadillas, and enormous Styrofoam cups of shrimp cocktail that both Wendy and I coveted. Maybe if we hadn’t eaten so many tacos already, we’d have split a serving. Wendy went for carnitas and I opted for chicken, which I hadn’t seen on any of the other menus. It was a bright orange color, likely tinted with seasoning salt, as Wendy pointed out. Not juicy, but definitely flavorful. Mi Guanajuato is also a convenience store, and I helped myself to a bag of chapulines, roasted grasshoppers, in the unlikely event that I got hungry on the drive home. 42 W. Myers Blvd., Mascotte,  (352) 431-9606

A mother and son run this taco truck next to a large warehouse full of tables and folding chairs, where at lunchtime, workers pull in their fleet vehicles and kids on their bikes ride around in the shade. We tried the cabeza tacos here, as well as the carne asada ($2 each), cut in generous pieces on top of freshly fried tortillas. Most of the other tortillas we sampled were fresh and warm, but Tacos de Don Ramon flash fries theirs, so the edges are crispy, crunchy and satisfying. 7048 FL-50, Groveland, (352) 348-9433find the best tacos in Central Florida

Can’t make it out on the road? Check out our recipe for brisket tacos.