When it was announced that Halloween Horror Nights would be canceled this year, fans were understandably disappointed to miss Halloween at Universal Orlando. Little did they know, Universal was already hard at work devising a plan that would still bring Halloween fun – and a few frights – back to life.

In addition to haunted houses, trick-or-treating, and the chance to wear costumes to the park, a huge part of this “resurrection” was, of course, the food. During a typical year, Universal goes all out with sweet and savory treats throughout the park, many themed to that year’s haunted houses. This year, there are a ghastly number of food options all over the park. Here’s where to find the best treats for Halloween at Universal Orlando.

For the first time ever, guests who visit the immersive HHN Tribute Store can pick up a few treats while they shop for Halloween merchandise. 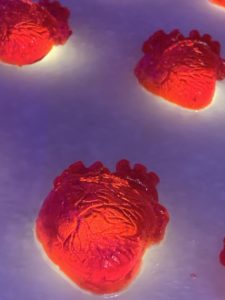 The glass case displaying the assortment of nearly 20 menu items sits in the back of a room made up to look like a creepy – and creaky – old attic. Each is themed to the spookiest time of year, and most look even more chilling under the store’s blacklights.

A few of the items on this year’s menu are donuts frosted to look like pumpkins and mummies, vegan brownie skulls, and red velvet cake-on-a-stick topped with a giant gummy eyeball. On the savory side, there’s a pretzel wrapped hot dog and a bacon, cheddar, and scallion waffle stick.

Your eyes may pass right over all of these, however, when you notice out of the corner of your eye the red, glowing hearts that appear to be beating. Atop a cold marble slab rests row after row of sour cherry-flavored gummies rhythmically beating in and out (pictured). Don’t worry, they only beat while they’re on display so the ones you purchase haven’t been similarly spellbound. 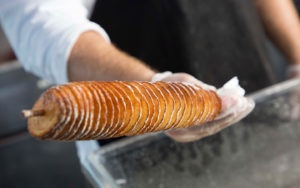 This season’s biggest Halloween surprise came when Universal threw fright fans a bone and opened two haunted houses during daytime hours. Near both houses, the park has set up food trucks – one with HHN mainstays like Twisted Coil taters (pictured) and footlong hot dogs and one with a rotating menu of more formidable fare like Stolen Teeth Street Corn and Fried Chicken and Funnel Brains. 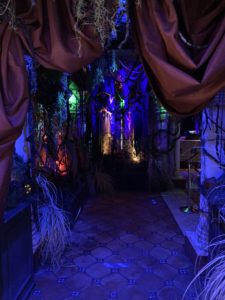 For the Halloween season, Universal’s Cafe La Bamba has undergone a macabre makeover (pictured). The aptly named Skeleton Bar is decked out with skeletons in various states of decay, but the playful food and cocktail options balance out the dark decor.

The menu includes themed choices like a Frozen Candy Corn non-alcoholic drink, Screaming for S’mores Fries made with sweet potato fries, marshmallow, dark chocolate chips, and graham crackers, and an Incantation Shrimp Cocktail inspired by the infamous appetizer that attacked the Deetz family and their guests in the film “Beetlejuice.”

If you’re in search of cocktails, you’ll need to venture past more skeletons into the depths of the Skeleton Bar. There, you’ll find the spicy Mango Inferno, a tea and honey-infused Loup-Garou, and the blood red Vampire’s Curse. 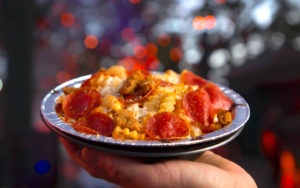 Pizza Fries are a Halloween Horror Nights staple and, in the event’s absence, Universal is currently serving them up at Louie’s Italian Restaurant. The dish consists of crinkle cut fries topped with marinara, mozzarella, pepperoni, sausage, and a dash Parmesan herb seasoning.

In addition to the always-available Voodoo Doll doughnut, this kitschy doughnut shop has added two specialty options for Halloween at Universal Orlando. Choose from a Jack the Clown Doughnut fashioned after the villainous HHN icon and a vanilla-frosted Pumpkin Spice Doughnut. 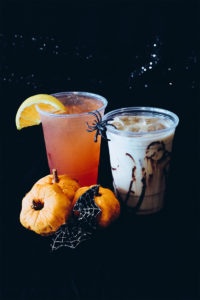 The four Universal hotels that are currently open to guests have gotten in on the seasonal festivities, as well. The Director combines Ketel One vodka, Kahlua, Amaretto, and heavy cream and The Chance is a mixture of Bacardi rum, Aperol, orange bitters, orange, and soda.

For more info Halloween treats at Orlando’s parks, check out our Visitors Guide.