We all crave a taste of home for supper now and then, whether our craving is from Mom’s table in the 1950s, ’60s, ’70s or ’80s. Here, three culinary leaders re-created a childhood favorite into a meal fitting for today’s tastes and lifestyle. 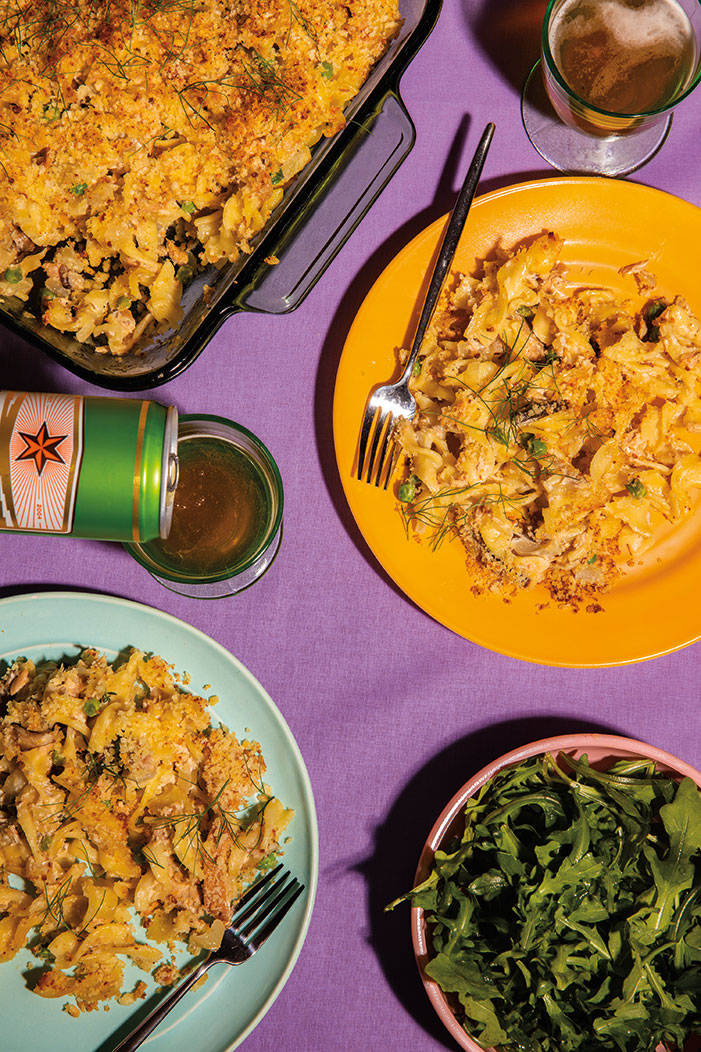 One day at The Rusty Spoon, which she has since sold, Chef-Owner Kathleen Blake had leftover albacore tuna belly and trim left from another recipe. She improvised and used it in a fresh-fish update to an old-fashioned tuna casserole and served it as a lunch special. It was a hit.

Salt and pepper, to taste

Place fresh tuna in a baking dish. Add olive oil to just cover. Bake for 15 minutes or until just cooked through. Drain. Break apart flesh with a fork and set aside. (Note: Oil can be strained and stored in the refrigerator for up to three months. Use to flavor pasta, vegetables or salad dressing.)

Place butter and 2 tablespoons olive oil in a large sauté pan and melt over medium heat.

Place milk in a small saucepan and heat over low heat until just warm. Whisk in cream cheese until smooth and thick. Stir in Worcestershire sauce, then season to taste with salt and pepper. Fold in the cooked or canned tuna and the English or sugar snap peas.

In a large pot of boiling salted water, cook the noodles until al dente. Drain and rinse under cool water. Gently fold in the vegetables, tuna, sauce and parsley. Pour the mixture in to a 2½-quart baking dish.

In a small bowl, toss the breadcrumbs, 1 tablespoon olive oil and the remaining thyme leaves with the garlic powder and pecorino. Sprinkle the crumb mixture over the top of the noodle mixture. Bake for up to 45 minutes, until the noodles are piping hot and the crumbs are golden brown. Garnish with fennel fronds. 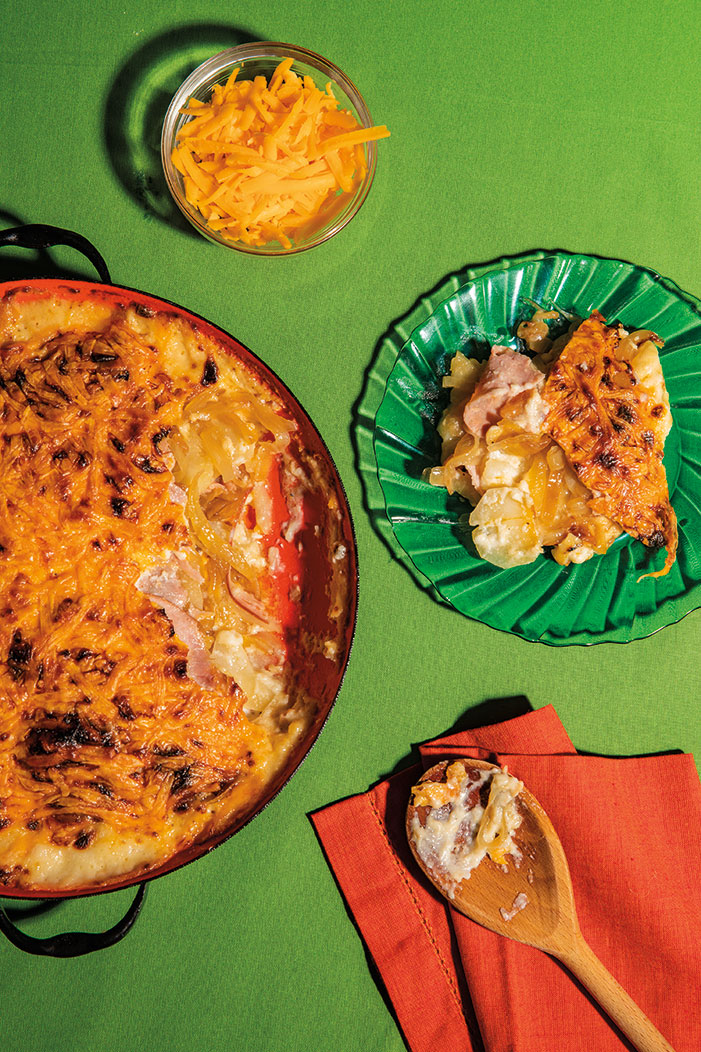 Chef Josh Oakley hesitates to modernize this staple, which was part of his mother’s regular rotation during his Upstate New York childhood. But he is a chef, after all, so he uses silky caramelized onions instead of raw, and country ham or prosciutto rather than the fresh ham of his childhood kitchen “just to elevate it a bit,” he explains.

Salt and pepper, to taste

In a large pan, heat olive oil over medium heat until it shimmers. Add onions, salt and pepper and stir to evenly coat. Immediately reduce heat to low and cook, stirring often, until onions are very soft and brown in color, about 90 minutes.

Grease a glass casserole dish with 1 tablespoon of the butter.

Melt the other 2 tablespoons butter in a pan. Whisk in the flour and cook on low for 5 minutes, stirring constantly.

Whisk in the milk and bring it to a simmer. Continue simmering until it thickens a bit.

Spread one-third of the thickened milk mixture in the bottom of the baking dish.

Add the potatoes, cooked onions, and shaved ham in layers. Drizzle on a little of the thickened milk mixture over each layer, season with salt and pepper, and repeat two more times. Pour any remaining milk mixture over the top.

Sprinkle the cheddar cheese and thyme leaves over the top. Cover loosely with foil. Bake for 30 minutes. Remove foil and bake for 15 minutes more to brown the cheese. Serve hot. 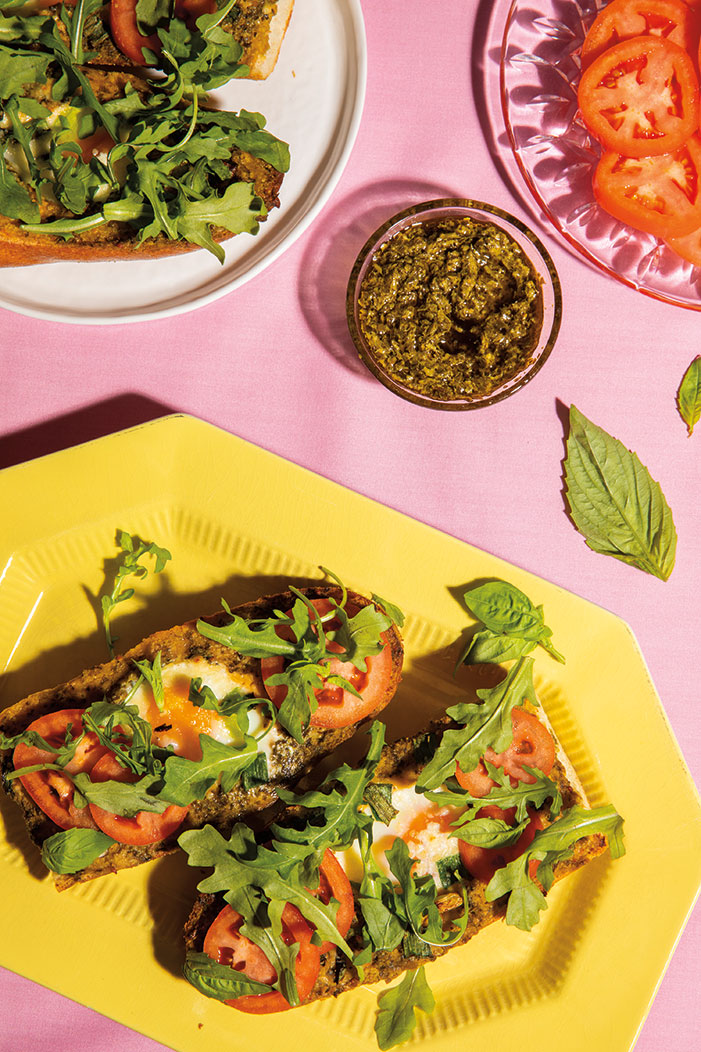 In today’s world of artisan pizzas, it’s ironic that 40 years ago Stouffer’s French Bread Pizzas were greeted with a collective WOW. The oblong frozen meals were a marked improvement over what children of the ’50s and ’60s ate—maybe an unexciting Celentano Brothers, Pizza-Fro or Totino’s pie. Today East End Market’s Chef in Residence Jessica Tantalo makes her own French bread pizza often, frequently with neither pizza sauce nor mozzarella. The one constant, besides good bread—even thick-sliced sourdough works well—is toppings that are “fresh in season,” whether winter tomatoes, blueberries with ricotta or the combo below.

Turn on broiler. Line a baking sheet with foil. Place the spring onion or scallion on it, then rub the onion lightly with canola oil and season with salt. Broil until it begins to char, about 2 minutes. Set aside to cool, then roughly chop and set aside.

Meanwhile, line a baking sheet with foil. Cut the baguette in half horizontally, then cut each half lengthwise to make 4 matching quarters. Place the bread on the baking sheet, then scoop out a small hole—sized to fit 1 raw egg—from the center of each.

Crack 1 egg into each hole and season with salt. Sprinkle on the chopped charred scallion and Parmesan, then add a pinch of crushed red pepper flakes if you like.

Bake for 10 minutes for a runny egg, 12 minutes for hard-cooked. Remove from oven, drizzle with olive oil, and top with basil and arugula. Season to taste with salt and pepper.