It’s a celebration of Southern at this award-winning Winter Park restaurant.

Best known for comfort food like buttermilk-brined chicken tenders, meatloaf with smashed potatoes and low country shrimp ‘n grits, The COOP is celebrating five years as a gathering spot for locals in the heart of Winter Park. Inspired by home-cooked meals he grew up eating in Jacksonville, Fla., Chef John Rivers of the award-winning 4 Rivers Smokehouse created this neighborhood spot to showcase true Southern cuisine. The family-friendly menu embraces the many cultures that influenced Southern cooking, with classic dishes from the Carolina low country, the Gulf of Mexico and the Mississippi Delta. 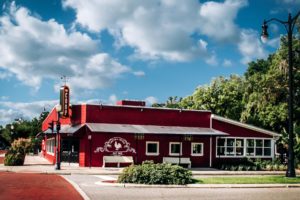 Carb load or go light with a variety of new farm fresh salads, but it’s the nostalgic “meat and three” approach reminiscent of old-fashioned diners that’s most tempting – fried chicken or catfish, chicken-fried steak, chicken pot pie and more with sides such as green beans, fried okra, hoppin’ John, mac n’ cheese and collards. You can get your chicken roasted, but most plates are piled high with crispy hot pieces.  Grab a table (stocked with a roll of paper towels and hot sauce), fill your glass with fresh-brewed tea and get ready for a celebration of everything Southern.

Breakfast isn’t an afterthought in the South, and The COOP takes it seriously, starting with a giant, warm cinnamon bun that’s worth the calories (and good for sharing). Hearty biscuits, gravy, bacon and eggs keep it simple, but signature dishes like the Mexican egg scramble with chorizo, poblano peppers and cheese with tortillas give breakfast a contemporary twist. There are pancakes and French toast, but the kitchen shines with savories such as the pulled pork skillet with potatoes and a fried egg or a fluffy omelet with Andouille sausage and shrimp.

As part of the 4R Restaurant Group, philanthropy is at the heart of every meal at The COOP, with the family of restaurants giving back to the community since its inception nearly a decade ago. Rivers established The 4R Foundation in 2015, and last year donated to 650 local organizations, non-profits and churches. And the 4Roots Farm & Agriculture Center is the foundation’s newest key initiative, a project to address food insecurity in Central Florida.

The COOP is open for breakfast, lunch and dinner Monday-Saturday.