Where to find tropical drinks with a side of nostalgia.

The original tiki bar, Don the Beachcomber, opened in Los Angeles in 1933 and capitalized on the ’30s-era fascination with the South Pacific and a post-Prohibition desire for cocktails. The trend really took off in the ’60s, and though it all but disappeared in the ’80s and ’90s, it’s back in a big way. Orlando has three of these kitschy, dark, Island-themed bars, and while they’re not exactly old, their retro appeal is what keeps us coming back. 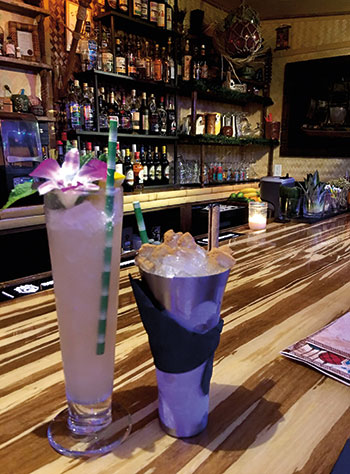 From left, Sumatra Kula and 151 Swizzle at Suffering Bastard.

One of the best things about the Suffering Bastard besides its catchy name is its location. The crafty team behind nearby Bitters & Brass operates this bijoux bar-within-a-bar tucked inside Tuffy’s Bottle Shop & Lounge in downtown Sanford, and there are more drinks on the menu than there are guests at any given time. A strict seating-room-only policy limits capacity and allows visitors to properly enjoy a tall and frosty 151 Swizzle made with overproof rum and absinthe and garnished with a smoldering cinnamon stick. This pick is at the top end of the menu’s self-styled ratings system that ranks cocktails as either mellow, mean or suffering, but the overall vibe is 100 percent mellow. Bartenders are happy to provide an education in the extensive liquid offerings and point out decor details such as thatching made from faux nicotine-stained newspapers. Even without the added perspective of a mean drink or two, the space truly transports. Open 5 p.m. to midnight Wednesday through Saturday from 5 p.m.; 21+ only.

Walking into Aku Aku, named for archeologist Thor Heyerdal’s book on the history and culture of Easter Island, feels like walking back in time to the late ’60s. Vintage bamboo and rattan furniture, hula-girl lamps, tiki-god carvings, blowfish lanterns and retro Polynesian tchotchkes coupled with retro music makes you forget about the downtown Orlando club scene just a few blocks away (and right downstairs at Stardust Lounge). They’re serious about rum here, with more than 70 varieties to choose from. Cocktails range from the classics—mai tais and zombies are balanced and delicious—to Aku Aku originals, like the signature Tiger F*cker, made with huckleberry vodka and house-made jalapeno-blackberry syrup. (Most are served in those beloved ceramic vessels shaped like parrots, tiki, coconuts or hula girls.) If nothing on the menu is calling your name, the bar staff knows their tropical tipple and are happy to accommodate special requests. Open every day, 4 p.m. to 2 a.m., except Sundays when the bar opens at noon. 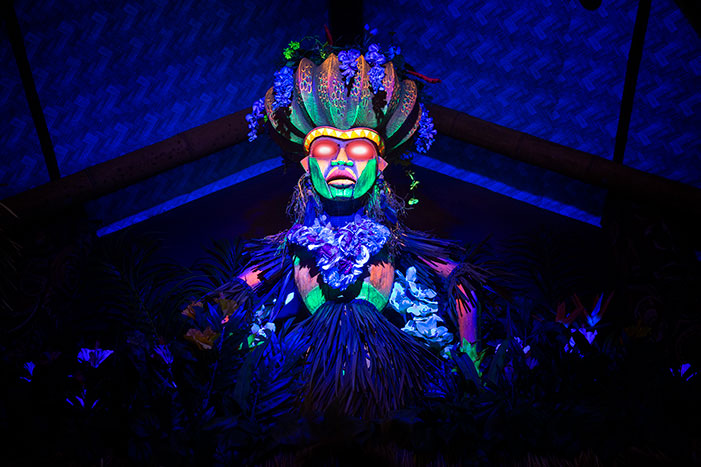 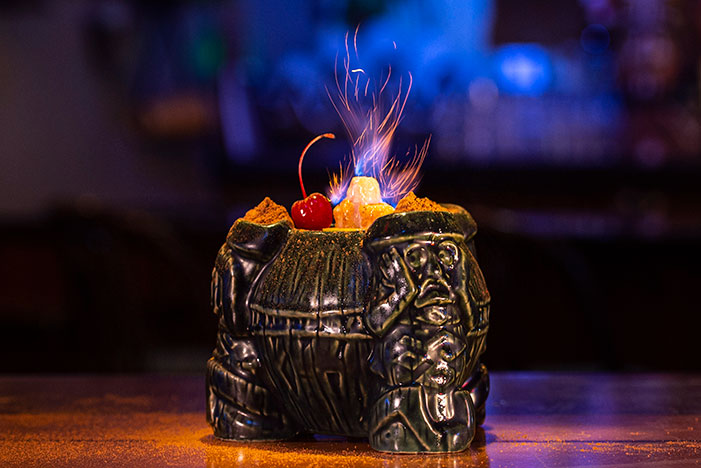 Theatricality has always been a part of tiki bars, and Trader Sam’s Grog Grotto takes drama to a whole new level. Just steps from the lobby in Disney’s Polynesian Resort, the lounge is overrun with artifacts collected by the legendary Trader Sam, “head” salesman at the finish of the Magic Kingdom’s Jungle Cruise attraction. So the bar is a little contrived. But Disney fanatics love the Florida version of the lounge that originated at the Disneyland Hotel—a classic Disney attraction with lighting, sound and visual effects without the price of admission.  (You can spend hours checking out references to the Jungle Cruise, the Enchanted Tiki Room, Twenty Thousand Leagues, Indiana Jones and the defunct Adventurer’s Club at long-ago Pleasure Island.) Some elaborate cocktails, such as the Shrunken Zombie Head and HippopotoMai-Tai trigger special effect sequences (an erupting volcano is the best one). Poke, sushi rolls, tacos, pan-fried dumplings and sliders are on the island-style menu. Kids are welcome until 8 p.m., then it’s 21 and older.  On cooler days, Trader Sam’s outdoor terrace is more conducive to relaxing without all the special effects. Open daily 3 p.m. to midnight.