Here’s where vegans can dine with carnivorous friends

“Where can we go to dinner with another couple?” a friend asked, desperate. “My husband is vegan, is tired of veggie burgers and doesn’t like to make a fuss with special orders.”

And so the search began. Our regular go-to places around town rarely move left of vegetarian, meaning most meat-free dishes are made with fish, shellfish, eggs and/or cheese.

To find some “regular” restaurants with a truly animal-free dinner entrée, we combed through the 2013 Zagat Orlando City Guide; visited the websites of every non-hotel, non-theme-park table-service restaurant listed and scoured the menu for vegan dinner entrées. Then we called to confirm that the chefs stir in no dabs of butter. In fact, we took a few restaurants off the list once we learned their online menu descriptions didn’t mention dairy items in, say, risotto or a pasta sauce.

Here are the rules we set:

• The restaurant has to be a table-service establishment that does not specialize in vegan or vegetarian meals, and is not primarily a coffeehouse or bar.

• The vegan dinner entrée can’t be a veggie burger.

• No salads. That’s not dinner.

• No special orders necessary other than “skip the dollop of sour cream” or some such.

Here’s what we found:

A low-key longtimer on College Park’s Edgewater Drive, Adriatico is an old-fashioned Italian restaurant. It’s quiet, the dishes are the familiar ones of our childhoods, and owners Rosetta and Marco Cudazzo know their repeat guests well.

While customers without dietary restrictions sup on veal alla Marsala and spaghetti with spicy shrimp “fra diavolo,” vegans order the cappelini alla checca ($15.50). It’s angel hair pasta tossed with cherry tomatoes, garlic, basil and extra-virgin olive oil. “We didn’t think of vegans when we added it to the menu,” Rosetta says. “People were asking for cappelini.” The dish is popular because “it’s very flavorful with very simple but good ingredients, not too heavy,” she says.

While non-vegans can add chicken or shrimp to their cappelini, vegans can request the spaghetti fra diavoli without the shellfish. adriatico-trattoria.com

Veggie tacos at Cocina 214 have layers of flavor from vinaigrette, salsa verde and a slew of fresh vegetables.

Tex-Mex fare is known for not only meat but lard mixed into refried beans, but Cocina 214 in Winter Park takes a fresher approach—so fresh that even vegans can eat without worry. Among the beef enchiladas and “Tim’s Flaming Rooster” chicken sandwiches is the Veggie Taco entrée ($13), which not only is vegan but has a V for vegan next to its name. The entrée is three tacos filled with sautéed vegetables, black beans, slaw, jalapeños and a citrus vinaigrette, plus a tomatillo-based salsa verde.

“We had no vegan entrées when we opened, but our comment cards ask, ‘What can we do to improve your experience,’ and people requested a vegan option,” says co-owner and manager Lambrine Macejewski. “The tacos are one of our best sellers, and they’re not only ordered by vegans.”

The Cocina 214 menu also has icons for vegetarian and gluten-free dishes. cocina214.com

The vegetable souvlaki wrap with grilled vegetables and hummus is one of two no-special-order-required vegan menu options at Taverna Opa.

Diners at Taverna Opa might be too busy dancing the Zorba to notice how varied the menu is, but this Greek restaurant on International Drive has two solid vegan entrées. One is Stuffed Peppers ($15), which are green and red bell peppers filled with herb-infused rice. “There’s also lemon and olive oil, and it all marinates so the rice absorbs the flavors before it’s stuffed into the peppers,” says chef-owner Katerina Coumbaros. “Then we roast them for a couple of hours so there’s loads of flavor. It’s a very traditional dish from the island of Crete, where we’re from.”

In addition, a vegetable souvlaki platter is entirely animal-free. “It has zucchini, mushrooms, peppers and asparagus,” Coumbaros says. “We roast them, then serve them on pita bread with lettuce, tomato and tzatziki or hummus, like Greek street food.” Tzatziki contains dairy, she notes, so vegans must opt for the hummus.

Why does such a meat-heavy menu have two vegan options? “These are traditional items,” she says. “In Greece we tend to eat more vegetables.” opaorlando.com

“No special orders” are part of the requirements, but we’re waiving that for “No Parmigiano shavings, please.” With those words, Winter Park’s romantic Italian restaurant Rocco’s goes from having one vegan entrée to three.

Its spaghetti with olives, red pepper flakes, garlic and oil ($14.95) is a natural. But, cheese-free, the choices get more interesting. Pappardella alla Toscana ($16.95) is pasta tossed with artichoke hearts, mushrooms, sun-dried tomatoes and arugula. “It’s made with a vegetable broth, which we make ourselves,” says owner Rocco Potami. “We put broth plus oil into the mix, which gives it a velvety texture.” A third option is Fettucine al Pomodoro ($14.25), tossed in a tomato sauce. roccositaliangrille.com

There’s plenty to choose from at this popular destination for hand-pulled noodles and other northern Chinese specialties in Chinatown Plaza on West Colonial. Zha jiang mein ($9.95) , a classic dish from northern China that translates to “fried sauce noodles,” often contains pork. Here it features a sauce made of three different fermented bean pastes over tender wheat noodles with green soybeans and slivers of cucumber and scallion. Dry-pot cauliflower ($12.95) with bits of tofu and green pepper gets increasingly more intense as it bubbles in a small wok on the table. 5148 West Colonial Dr., Orlando; (407) 930-3188. 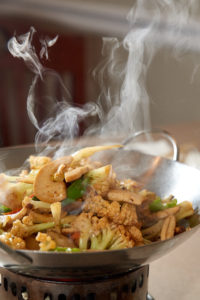